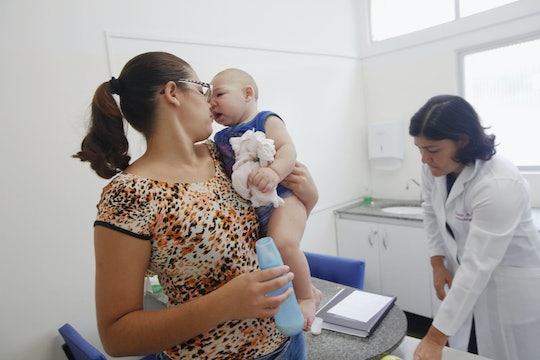 Where Does Zika Rash Appear? You Don't Want To Know

Even though it is not often fatal, Zika virus does have some gnarly symptoms. Usually, it manifests with a fever, aches and pains, conjunctivitis, and a rash. The Zika rash appears early on and is the worst part. It's a painful rash and starts out as tiny little bumps, usually on the face to start. Then it spreads to other parts of the body like the arms and legs and all over. Although not all patients develop symptoms, when they do, the rash is the most common. In fact, 90 percent of patients develop the rash and I'm sort of already getting itchy just reading the Centers for Disease Control page.

Health officials don't recommend trying to treat Zika on your own. They say that Tylenol or acetaminophen to reduce the pain or fever, but not to take anything else like aspirin and other non-steroidal anti-inflammatory drugs before being seen by a doctor. Apart from seeing a doctor, the best thing a person with Zika symptoms can do is hydrate and flush that Zika out. The CDC also recommends that Zika patients try as much as possible to not get bitten again by another Zika mosquito — not like anyone could tell, but staying away from bugs is the best way to stay safe.

The rash, along with other symptoms of the virus, goes away within a week and then the virus is gone completely. No harm, no foul for most people. But Zika is especially dangerous for pregnant women, women of childbearing age, and their fetuses. For women and babies, the virus causes birth defects like microcephaly and other neurological disorders. Which is why the Obama administration is worried about the Zika funding bill waiting to be approved for vaccine research and public health initiatives.

On Friday, President Obama said, "When there are emergencies, when there are public health emergencies, when we know that we have the chance to prevent serious tragedies in the lives of families and protect the health and safety of our populations, and particularly our children, then those politics need to be set aside.”

Already some U.S. territories are advising women to use protection and abstain from sex until the Zika threat is figured out, according to The Guardian. But that's not a great response. "To tell people not to have sex until we get back to you is not a very satisfying recommendation,” Anne Schuchat, a CDC deputy director said.

In that light, a bad rash for a few days is the least of everyone's worries. It's not pretty, but it's not the worst.