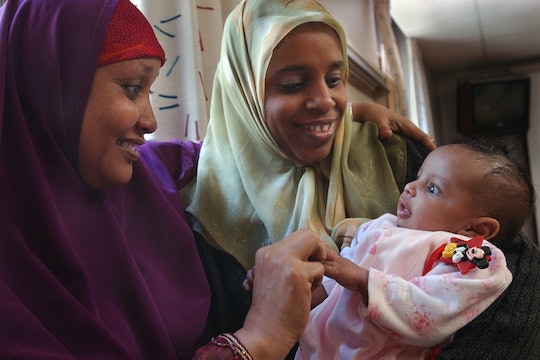 Should We Be Making It Harder For Doulas To Help?

They are there during labor to listen, to suggest birthing positions, to physically offer relief, relaxation, and emotional support. They have been supporting birthing people since ancient times, but those in the birth space are asking: should doulas be regulated by state agencies?

The birth worker community largely believes they shouldn't. "To create more barriers for women to be able to access doulas based on certification, especially when there isn’t an overarching certification body like in nursing or any other clinical skill, I think it’s a disservice,” Erica Chidi Cohen, a doula, CEO of reproductive health center LOOM in Los Angeles, Calif., and author of Nurture: A Modern Guide to Pregnancy, Birth, Early Motherhood and Trusting Yourself and Your Body, tells Romper by phone. But those in charge of providing state services disagree.

Use of doulas has become more commonplace in recent years, with celebrities like Amy Schumer opening up about the benefits of doula support during childbirth, and studies showing that continuous support from a doula leads to lower cesarean section rates, as a 2014 study of 2,400 deliveries published in the American Journal of Managed Care found, and better maternal health outcomes overall (shorter labors, higher APGAR scores, lower likelihood of labor interventions, among other findings). With greater knowledge about the benefits, lawmakers have finally started to take notice of the the potential to improve public health and lower costs by investing in doula programs.

This year, New York state announced a pilot program to provide doula services through Medicaid, legislation that came alongside efforts to secure coverage under private insurance and had the knock-on effect of some states deciding to regulate the certification of doulas.

One bill in particular has sparked controversy amidst the doula community and that is New York Assembly Bill A364B, which “authorizes the certification of doulas” and continues to say that “only those certified (under this bill) may provide doula services defined as continuous emotional and physical support provided by a certified doula throughout labor and birth, and intermittently during the prenatal and postpartum periods.”

The bill goes on to lay the groundwork for how a doula will get certified through the state and includes evidence of training, examination, being of “good moral character as determined by the department” and of course, a fee.

The stated regulatory fee, examination, and assessment of 'good moral character' are only some of the requirements that can hinder access to affordable services, especially for African-American and marginalized pregnant people.

Doulas like Chanel Porchia-Albert, the founder and executive director of Ancient Song Doula Services are particularly concerned about the language of the bill. “I am in opposition to the bill as it stands and feel that the language should be amended to meet the needs of the community. It's an umbrella bill which can leave it open to interpretation,” Porchia-Albert tells Romper.

Doula organizations all over the country have been certifying doulas on their own, to work in their communities without legislative interference and worry that state certification will limit access to doulas, especially in communities of color.

“The stated regulatory fee, examination, and assessment of 'good moral character' are only some of the requirements that can hinder access to affordable services, especially for African-American and marginalized pregnant people," explains Portia-Albert, who notes that someone who has been previously incarcerated for a nonviolent offense would be deemed "not of good moral character." The effect would be "further marginalizing that community and limiting their ability to work for themselves in a nation that continuously penalizes anyone with a previous criminal record continuing the cycle of systemic oppression” she explains.

Currently, there are just about 15 bills nationwide addressing Medicaid reimbursement for doulas and in some cases, like in New York, state certification requirements for who can use the term “doula.” The bills seem to be coming from a good place; an effort to improve maternal health outcomes, remove barriers to ongoing support and education throughout the birth and postpartum periods and standard of care, that can be consistent across the board. If federal and state dollars are being pumped into a system that will support and encourage the use of doulas, it makes sense that government administrators want a say in how their money is being used and who it is going to.

However, there are unintentional consequences to the attempt to create regulations around the use of the term doula Cohen can see them clearly. “I think as much as it is an attempt to standardize care, it creates a barrier of access to Black women particularly, and brown women as well, who are already in a very vulnerable position," she says. "I think the actual work of doulas very much is a, what I would call, a lay-persons skill. It doesn’t require specific tutelage for someone to be proficient at it because so much of it is about containment and empathy and holding space.

Over and over again discussions surrounding bills like New York Assembly Bill A364B, AKA “the doula bill,” spark conversations of race, access and the disparities that already exist in a broken healthcare system that will not be helped by further limiting continuous the continuous support offered by doulas to birthing individuals.

I think as much as it is an attempt to standardize care, it creates a barrier of access to Black women particularly, and brown women as well, who are already in a very vulnerable position.

Black and brown women are dying of pregnancy related causes at a rate of around three times higher than white women, according to The Center for Disease Control and this has caught the attention of lawmakers like assembly member Amy Paulin, the sponsor of this bill, who ensures it was not created to regulate doulas or limit access but rather to acknowledge the profession in the eyes of the state and make doulas eligible for reimbursement through medicaid.

“In reading in the last few years about how doulas can help improve maternal mortality and how behind New York was in terms of those statistics, I thought anything I could do to help to promote the profession would be helpful," she tells Romper. "One of the key ways to do that in New York State law is to begin the process of recognizing the profession in the law and the first step in that is to set a state standard for the profession, which would lead to the ability to get medicaid reimbursement and private insurance reimbursement and to stop hospitals from harassing doulas when they are present at a birth."

Regarding the concern that a state certification requirements would take away the title from those who have already been practicing as a doula, Paulins says that was not the intent of the bill, telling Romper “nothing changes from what exists right now, the only thing that changes is the ability to have an additional certification through the state and to seek reimbursement from insurance."

The state has an interest in guaranteeing a standard of care, she says. "What I am hoping we can do is work together so that we can get that for the doulas who want it."

Although the New York "doula bill" has not been signed into law as of yet, it is sending ripples through the doula community to defend what they see as their right to practice without regulation or interference from a governing body.

If nothing else, the introduction of bills like these elevate the conversation about disparities in maternal care, the need for continuous support during pregnancy, birth and postpartum and the need for change — at any cost.

Lede photo caption: (Left to right) Hawa Ade was Muna Said Mohamed's doula for the birth of her eighth baby, two-month-old Mariam Mohamed at Fairview University Hospital. Ade is a doula at Hennepin County Medical Center, too. Mohamed said she was grateful for the massages from Ade which eased the pain of labor. (Photo by JOEY MCLEISTER/Star Tribune via Getty Images)