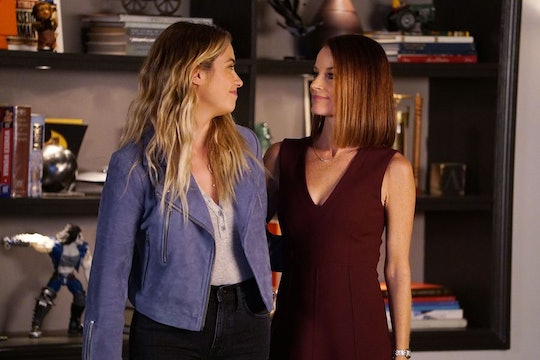 Your favorite wine mom is back in Rosewood. Ashley Marin makes her return to Pretty Little Liars this week and fans can't wait to see what she's up to. So where has Ashley been on Pretty Little Liars? It's unclear what Hanna's mom has been up to this whole time. The last fans saw of her, she was running the Radley, which is now a hotel, and she also got Emily a job as a bartender there. Other than that though, Ashley has been M.I.A. The real question is, why is she back?

According to the episode description, Ashely returns to check on Hanna "after learning frightening information." She's also in to town to ask Caleb "what his intentions are with her daughter." First, what is this frightening information that Ashley has learned? Did she find out about what happened at the blind school and Noel's death? Or did she learn that Spencer was shot and Mary Drake is Spencer's real mom? It's possible she had a chat with Pastor Ted recently and learned he's Charlotte's father. Really, there's so many things Ashley could have learned that would make her rush back home it's hard to imagine it's just one thing.

The bigger question is why is she inquiring about Caleb's intentions with Hanna? Ashley has always been a fan of Caleb. (Haven't we all?) Well, maybe not at the very beginning, but once they got past the whole "he was hiding away in her house" thing, they've been pretty close. The promo for this episode promised a Liar would get engaged. Could Caleb and Ashley be discussing his impending proposal to Hanna? It certainly seems likely.

It wouldn't be at all surprising if Caleb wanted to keep things traditional and ask Ashley for her permission first before proposing to Hanna. That would better explain why Ashley randomly asks Caleb about his "intentions." If that's the case, Haleb shippers can get ready for a wedding, which will surely be beautiful; it's Hanna after all.

Also, at this rate, Hanna may end up married before Aria. With A.D. still breathing down her neck and the return of Nicole, Aria and Ezra's relationship has taken a serious nose dive. Hopefully these two will be able to make it work and still make it down the aisle. Maybe there's a double wedding in the Liars' futures. That would be an interesting way to close out the series.

Make sure to tune in to Pretty Little Liars on Tuesday at 8 p.m. ET on Freeform to find out what's going on with the Marins and the rest of the Liars.