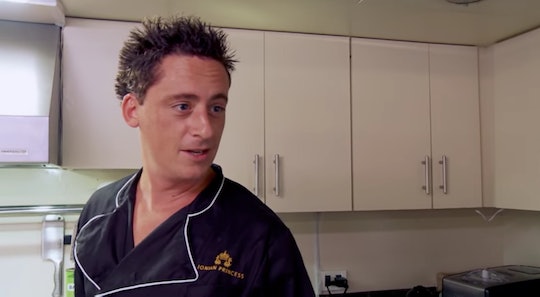 Below Deck Mediterranean has been playing a game of musical chairs with its chefs in Season 4. After Chef Mila Kolomeitseva didn't work out, stew Anastasia Surmava stepped in to fill the spot. But now Ben Robinson is returning to the show after several seasons away to cook up a storm for the Sirocco. But where has Ben been since he was last on the show?

Ben shared a little bit about the past few years in a clip of his return on the Bravo website. Since Greece he's mostly been catering. He has an "exclusive catering company" that operates out of Fort Lauderdale, but he spends his time traveling all over the United States cooking for people. Ben opened up further in an interview with People. He explained that he took a few years off yachting to build a career "on land." His catering business handles private events, which means exclusive parties of the corporate and personal variety. It could take him anywhere in the country. "I've been running that successful company on land for many years now, so I've really been sinking my teeth into that business," Ben said.

On his official website, it also states that Ben is available for private instruction and guest appearances as well.

Ben spoke about his personal life with People, too. He was seeing stewardess Emily Warburton-Adams when he left Below Deck Med in 2017, but they've since decided to be friends instead of a couple. He lives in Florida and she's in the U.K., which makes seeing each other a little difficult. He's single at the moment because he's been focusing on his business and trying to settle down, but now he's interested in "a viable partner who I can maybe marry and have a kid and everything."

Though Ben was excited to be back on Below Deck Med, he didn't regret leaving in the first place. He needed to have a few years to figure out his career outside of the yachting industry. That journey has been partially captured on his Instagram account, which is packed with enviable food photos. Though he doesn't share the details of the events he works (they're private for a reason), he's posted enough pictures of elegant steaks and artistically arranged veggies to make anyone's mouth water.

The break from Below Deck Med was also necessary because of how difficult it is to be a chef on a yacht. Ben was working 20 hours a day for six weeks straight, as he told Bravo's The Daily Dish. Becoming a caterer gave him more time to relax and to focus on food, but it also made returning to the show slightly daunting. Fans will be able to see how well he handled the transition when he returns in "It's Ben a Long Time." But I'd hazard a guess and say all those years of experience probably served him well. And now that he's learned some new tips and tricks from his business, he might even be able to take things to the next level.