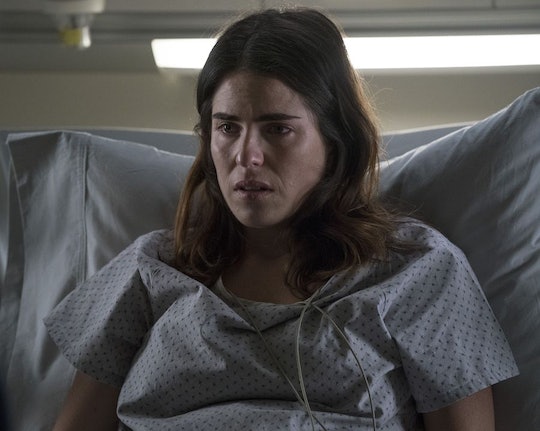 As per usual, last week's episode of How to Get Away with Murder ended with a bit of a cliffhanger. After Dominic's phone had been ringing off the hook all episode, it turned out it wasn't Laurel's dad calling, it was her mother. Now many fans are wondering: where has Laurel's mom been on HTGAWM?

Unfortunately, that's difficult to answer right now. Last week's episode provided us with the most clues about Laurel's absentee mother. According to Laurel, her mom suffers from a type of rapid cycling bipolar disorder and she was diagnosed after she gave birth to Laurel. According to Laurel, this happened because her father locked her mom up in a hospital, just like he's now done to Laurel herself. Once she was institutionalized, her mother's mental health deteriorated. Whether or not that's entirely true, it does give a little insight into why Laurel's mother has been MIA all this time.

We've already seen how easy it was for Jorge to declare someone (Laurel) unfit to take care of her child. It'd make sense if he did the same thing to Laurel's mother, though one has to wonder why. Did she try to get Jorge in trouble for his criminal activity just like Laurel tried to do? Or is there something even darker in their past?

That's hard to say. What we do know is Jorge married another woman, Elena, a long time ago. The pair were wed when the family moved from Florida to Mexico, although when exactly that was is hard to say. However, it seems the family made their way back to Florida since the one time Elena was seen was back in Season 1 when Laurel went to West Palm Beach, Florida to see her family. While there, Jorge (who has since been recast) referred to Elena as Laurel's mother.

It wasn't until later that it was explained Elena is actually Laurel's stepmother, however, the fact that Jorge didn't use the term "step-mother" seems to point to either he completely tries to pretend Laurel's real mom doesn't exist, or perhaps Elena has been around for so long that she's actually more of a mom to Laurel than her real mom is. Although based on their Christmas dinner interactions, it's clear they're not close.

Regardless, Thursday's episode of HTGAWM will actually be the first time Laurel's mom is seen on the show. Based on the trailer, she'll be put on the stand as part of Laurel's custody battle for her son, however, it's unclear whose side she's on. One would assume it's Laurel, based on the way she hugs her in the promo and the fact that she seems to have every reason to hate Jorge. However, when Annalise questions her, she asks if Laurel's mom believes she was a good mother to Laurel. It's unclear what point Annalise is trying to make exactly, but no doubt it may paint Laurel's mom in a bad light.

Still, for the most part it looks like Laurel may actually have another ally in the battle against her dad, but will the reappearance of her mother be enough to get Laurel her son back? It's hard to say for sure, but hopefully by the end of this week Laurel will have her baby back in her arms. And then maybe we can finally find out his name and perhaps learn more about this mysterious connection between Wes and Dominic.

Make sure to tune in to How to Get Away with Murder to (hopefully) get some answers to all these questions. The new episode airs at 10 p.m. ET, right after Scandal.