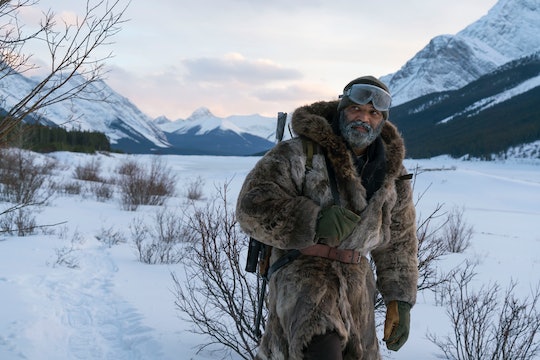 Netflix's Drama 'Hold The Dark' Has A Surprising Setting

If you’ve seen Netflix’s new film, Hold the Dark, you may have noticed the snowy landscapes of Alaska in the background. The story follows a young couple's quest to find the wolves who attacked and killed their son, and the remote Alaskan terrain seems perfect for the story. But exactly where in Alaska is Hold the Dark set? The film and original novel it was adapted from are set in the fictional town of Keelut, a remote output of Alaska, named after the evil hairless dog spirit from Inuit mythology.

But despite being a rural Alaskan town, the landscapes of Keelut in Hold the Dark were actually filmed in Canada. According to the Calgary Herald, director Jeremy Saunier cast Alberta’s mountains and vistas to serve as the film’s remote Alaskan landscapes. “The environment inspired me to actually find very limited pockets where I could actually slow down and just be grateful. It was a huge help going forward,” said Saunier. “I would literally flop down in my snowsuit, back into the snow, and just look up at the sky and mountains and just take a few minutes, which I’ve never done before.”

The report revealed that much of the film was shot in the Kananaskis, Lethbridge, Drumheller, Morley and Calgary areas of Canada in first part of 2017. Westworld actor Jeffrey Wright plays wolf tracker, Russell Core, and he told the Calgary Herald that filming in the mountains of Canada was cold — falling to -23 C — but he had no complaints, and was actually hoping for colder days. “We wanted the elements to be present. We wanted the steam vapor to push from the mouth with each breath and we wanted to have driving snow,” he told the outlet. “A major character in this story is the laws of nature. So the more Alberta it was, the better for us.”

The film is based on William Giraldi’s 2014 novel, Hold the Dark, and tells the story of a mother, Medora (played by Riley Keough), who enlists the help of Core to find her son’s remains after he is killed by wolves. Her husband, Vernon (Alexander Skarsgard), is away at war in Fallujah, and when he returns to Alaska and learns the tragic news, he embarks on a vengeful mission. The story is chilling, and while it is purely fictional, the author tells Romper that it was inspired by a news story he once read.

“I remembered reading a newspaper story somewhere about an isolated, mountain village in Pakistan that had experienced wolf attacks, wolves that stole children,” Giraldi reveals. “I was so drawn that story, to the otherworldly and mythic quality of it, that I knew I had to craft my own story from it.” However, the author wanted his story to be an American one, and he wanted the locale in his story to become a character of its own.

So, Giraldi channeled the perilous, yet beautiful landscapes mountains of Alaska for his novel. “Alaska is the last great untamed American landscape, a giant expanse that remains mostly a mystery and wholly alien to outsiders,” he explains. “It is a place that fosters imagination, and I think of myself as imaginative novelist, not an autobiographical one.”

Why the filmmakers chose to shoot in Canada instead of Alaska is unclear, but according to The Hollywood Reporter, many Hollywood films are being produced and shot in Canada due to budgeting constraints and lenient tax laws. Whatever the case may be, the scenes in the film look epic, and it will be fascinating to watch this grim tale unfold upon its mountainous landscapes.

Hold the Dark premiered on Friday, Sept. 28 on Netflix.