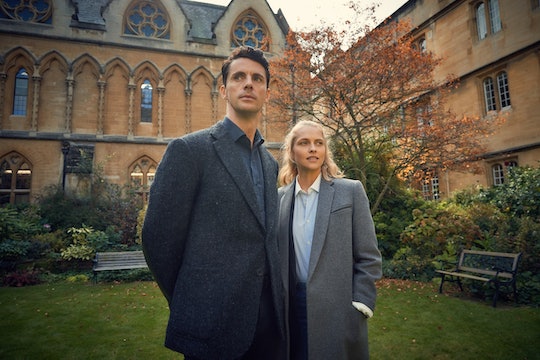 According to Express, the English city of Oxford, along with the historical Bodleia Library are like fully-developed characters in their own right on the show. The library is one of the oldest in Europe (the second largest in Britain) and though a lot of the episodes you know and love were actually filmed by Welsh production company, Bad Wolf, in Cardiff, this particular scenery has been the backdrop for a lot of beloved movies (hi, Harry Potter). The Radio Times confirmed as much, saying the split was 60 percent on location (in Oxford) and 40 percent in the studio (in Cardiff Bay).

The show is based on The All Souls trilogy of books (A Discovery of Witches, Shadow of Night, and The Book of Life), by Deborah Harkness. The novels are filled with intricate setting descriptions, so fans must love seeing those brought to life on the small screen. It doesn't matter if scenes are shot on location or not — as long as it's doing the content justice. At San Diego Comic Con, actress Alex Kingston (who plays Sarah Bishop in the series), said of the sets, "When you see the interior of the house, just know that’s a set, not a real house — it’s amazing."

A Discovery of Witches centers around the first book in the series. While book-to-TV adaptations can be hit or miss for fans (especially if the original is especially beloved), according to the showrunners, this particular adaptation stayed pretty true to the original creation with a few edits to give fans even more throughout the eight episodes.

In case this is the first you've heard of the book or the series, a) you're missing out, but b) you can redeem yourself by catching up on the story of a witch and professor Bishop (Palmer), now. There's mystery and intrigue as the professor tries to separate the witchy side of her heritage while she and vampire, Matthew (Goode), accidentally fall for each other, despite the longstanding tradition of vampires versus witches. All the while, he's on his own mission to figure out why vampires are disappearing into extinction. I hate when that happens to me, too.

As for the setting, though the cast and crew for A Discovery of Witches received permission to film inside the Bodleian, it wasn't without major restrictions (limited crew, restricted filming time, and more things that made it nearly impossible with budget constraints). That made the on-location shooting less practical. The compromise came by building their own version of the Bodleian and Duke Humphrey's library, which is mostly what you'll see when you tune in. Since the author of the series gave her stamp of approval on the duplicate set, fans should, too.

With so much at stake on A Discovery of Witches, you'd think the backdrop wouldn't matter, but staying true to the author's vision actually made the visual interpretation that much more compelling. Whether you're on team witches or team vampires, I think everyone can agree the real MVPs are the the set designers.