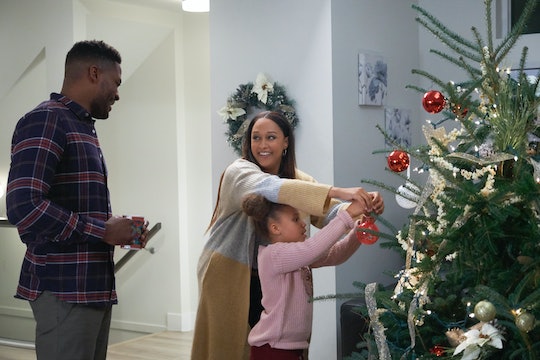 'A Gingerbread Romance' Is Actually *Not* Set In A Small Town

Romance, Christmas, and lots and lots of holiday treats — A Gingerbread Romance has got it all. The new Hallmark movie, which premieres on the network on Dec. 16 at 8 p.m., stars one-half of everyone’s favorite set of ‘90s twins, Tia Mowry-Hardrict, as Taylor, an architect who finds herself competing in a gingerbread house building competition. She is all about getting “home” for the holidays, but what is home, exactly? Where is A Gingerbread Romance set?

As it turns out, Taylor’s a bit of a nomad. Home for the holidays, like the song suggests, is a concept explored in many Christmas flicks, with the main character usually coming to the (late) realization that home is where the heart is (yes, another corny song lyric, I’m sorry). But things are a little reversed here. Taylor has always cared most about having Christmas with her family, wherever they may be. In a preview for the movie, Taylor tells Adam (her baking partner turned romantic interest) that for the first time in a long time she feels like she's home for Christmas, referring to her time spent with him and his daughter, Brooke.

The film takes place in Adam’s hometown of Philadelphia. Taylor is living there and working as an architect for a major firm, but she’s eyeing a promotion that will take her to Paris. This, of course, becomes the crux of the film: Adam, a widower, is clearly falling for Taylor, and if her come-hither eyes in the trailer are any indication, she’s definitely into him, too. But she’s a career-focused woman, and it seems like she’s comfortable with the idea of moving around a lot for work. So will Adam convince her to stay and build a life with him and Brooke in the City of Brotherly Love? You’ll have to watch to find out.

Hallmark has been getting better about expanding its locations for Christmas movies as of late. Southern cities, like those at the center of Christmas in the Heartland and Christmas at Graceland, have become more popular, steering away from the usual New York City snow-filled holiday. New England, with its woodsy cabins, is also a common location for these kinds of movies. But Miss Christmas takes place in Chicago and Enchanted Christmas has a Sante Fe, New Mexico backdrop. Considering Hallmark’s viewers live all over the country (and, I would assume, other parts of the world who have access to the network), it’s smart to use its mass quantity of flicks to highlight as many different towns and cities as possible.

Of course, just because it’s set there, it doesn’t mean any filming was actually done in Philly. A lot of Hallmark’s movies are filmed in Canada (Vancouver is said to be the new Hollywood, and it’s obviously a great setting for movies meant to take place during the winter months). So don’t tune in looking for Gritty, the city’s new pseudo-hero, but there may be a stray shot of the Liberty Bell somewhere in there. Besides, the setting really isn’t that important — you know you’re just watching for that final shot of the two lovers finally kissing as the snow falls around them.