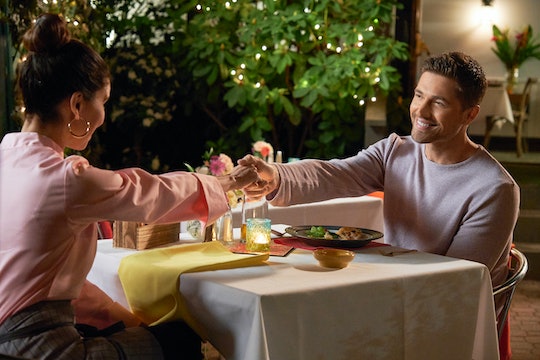 When watching Hallmark's food-forward rom-com A Taste of Summer, it's understandable to salivate over the dreamy, small town New England setting (as well as the food). The town of Bright Shore looks like something straight out of Gilmore Girls, so I'll bet that right now you're Googling where A Taste of Summer is set and looking up flights.

According to the official movie description, A Taste of Summer is set in the fictional town of Bright Shore, Massachusetts. While it sounds like a real place that could exist off the coast of Massachusetts, it's not. I would liken Bright Shore to the Hamptons or perhaps somewhere in Maine, a place with a rich history, a great food scene, and the kind of community where locals support one another. Hallmark's film history suggests that the movie may have been filmed somewhere in Canada. In fact, Eric Winter (who plays Caleb Delaney), confirmed to Parade Magazine, the movie was filmed in Vancouver

A Taste of Summer follows sous chef, Gabby Ferrar (Roselyn Sanchez), as she moves from New York to Bright Shore to open a new restaurant. Enter single father and former pro baseball player (who now coaches the local girls' softball team), Caleb (Winter). He already runs a local restaurant and isn't exactly thrilled when Gabby comes to town. Both restaurants enter the Taste of Summer Food Festival's competition, and both Gabby and Caleb play to win. The two may not initially gravitate towards one another, but through the course of the summer, they find commonalities (and maybe even love). The third flick in the Summer Nights lineup, A Taste of Summer mixes new beginnings with friendly competition that may inspire you to whip something up in your own kitchen while watching.

In the same interview with Parade, Winter also spoke about his first on-screen partnership with real life wife, Sanchez. "We did work together where I produced a movie with Roselyn," he said. "She starred in it. That was the first time we worked hand-in-hand all the way through, but never acting." If you're wondering whether Winter liked acting opposite his wife, he added it was "a lot of fun," even though they have different approaches to a project. "I’m joking around a lot and goofy on set and I like to get people laughing and she’s more focused and serious at times, which we would tease each other about." He also pointed out they get along and nothing about it was ever "difficult," which is something a loving husband is supposed to say, in my opinion.

A Taste of Summer may not be set in a real place you can visit in the U.S., but that won't necessarily take away from the movie itself. If you need a place to visit after viewing this one, head to Canada. It's there you'll see the scenery from this Hallmark movie (and many others). And if you're broke like me, Google maps with street view is an easy pseudo-vacation without spending a dime.