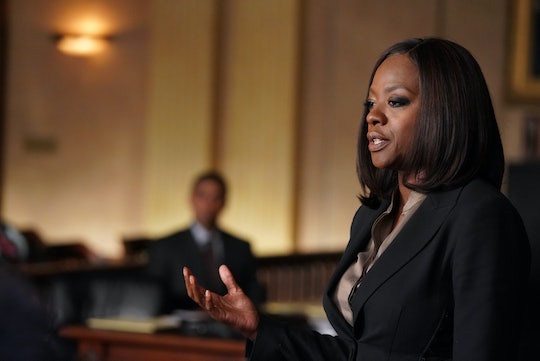 'HTGAWM' Hints At What Happened To Annalise In The Flash Forwards

How to Get Away With Murder has been handing out snack-sized reveals in every episode of Season 4 as it builds towards the winter finale, but so far none of the puzzle pieces have managed to quite fit together. "Stay Strong, Mama" finally let the audience in on the fact that Annalise was alive, though now there are just more questions about what happened to her. Where is Annalise in the flash forwards on HTGAWM? It was less than clear.

At the end of the episode, the flash forwards began as they have for the past few weeks, with Isaac in the hallway outside Laurel's hospital room, desperately trying to reach Annalise on the phone so he could let her know that Laurel was awake. This time viewers finally got to see what was going on on the other end of that phone call. Annalise was huddled in a shower fully dressed with blood swirling down the drain and a haunted look on her face.

It's good to know she's not dead (though of course everyone knows the show would never kill off Viola Davis), but it's still impossible to say where she was or what happened to her. HTGAWM answered a question with another question.

The flash forwards are now only a week away from what's going on in the current timeline, and it's more difficult than ever to imagine how the characters will get from where they are now to where they are in the future. Things were looking up for Annalise in "Stay Strong, Mama" as she achieved some victories in her class action lawsuit. She made some painful breakthroughs while discussing her grief over her lost child, but Annalise actually seemed to be doing well for once and progressing in a positive way. That she might lose it all in a week is heartbreaking.

The shower Annalise was sitting in in the flash forward was utterly nondescript, making it difficult to place; all the audience got to see were the tiles and the drain, which were hardly identifiable features. The only thing that was certain was that Annalise was not in the bathroom in her hotel room, because that room was splattered with blood and crawling with police officers. She was somewhere else, somewhere they couldn't easily find her.

This is a big leap with very little evidence, but I would speculate that she was at Bonnie's place. Go with me on this for a minute. Bonnie and Annalise have been on bad terms all season long, but the show has also emphasized how important their relationship is and how much they mean to each other despite everything. Annalise pushing Bonnie away when she fired everyone fractured things between them, but that could also give it added weight when she turns to Bonnie for help in her time of trouble — whatever that trouble may be.

Bonnie had also been seen visiting every crime scene in the flash forwards, starting with Annalise's hotel room. It seemed like she was there in an official capacity as the A.D.A., but what if she was actually there to help Annalise? Perhaps she left Annalise behind in her apartment to clean up and calm down while she scoped out the situation to see what she could learn. It would be just like Bonnie to sneak around getting information for Annalise, even if she did so against her better judgement. The tiles in the shower even had a blue-green tinge that, while admittedly generic, could fit in with Bonnie's decor.

But that's really just a guess. HTGAWM is playing its cards closer to the vest than ever before and this mystery seems no nearer to unspooling than it did in the premiere.