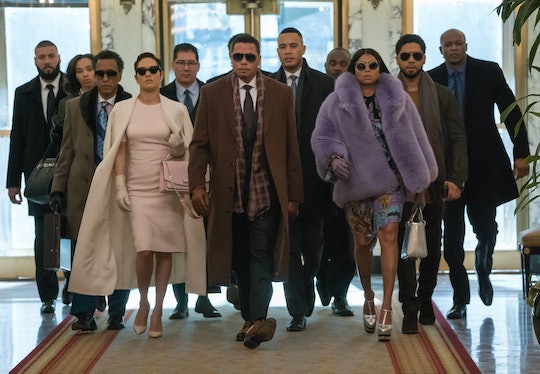 The Search Is On For Baby Bella On 'Empire'

Prior to last week's episode, there was one member of the Lyon family void of any drama: Hakeem's daughter, Bella. Well, that's not completely true. Her grandfather, Lucious, is also technically her stepfather because he's married to her mother, Anika... but that's besides the point. However, Bella became the center of attention last Wednesday when Child Protective Services took her away from her family. An anonymous tipster told CPS to take her away, but who was it? Where is baby Bella on Empire? Given that the Lyons aren't so well-liked, there are a few people that could be responsible for her disappearance.

The most obvious choice is the Dubois family. Angelo and his mother, Diana, in particular seem out to get revenge on the Lyons. This is because not only did Cookie and Angelo have a nasty break-up when she refused his marriage proposal, but they believe she ruined his career. Angelo was set for political stardom, but due to getting riled up while wearing a live microphone, he revealed to the public that he broke the law for Cookie. He and Diana could seek revenge as a "tit for tat" strategy — and with their connections in the justice system, calling CPS would be easy.

From the preview for Wednesday's episode, conveniently named "Absent Child," it seems that the Lyons believe the Dubois are behind Bella's disappearance as well. There are, however, other Lyon enemies it could be, too. Another suspect is Tariq, Lucious' half brother. Even after getting suspended from the FBI, he was hellbent on turning in Lucious. Not only that, but Anika fooled him into thinking they were together when she was wearing a wire for Lucious the entire time. Tariq may want to hurt both Anika and Lucious all in one blow.

A less likely, but still possible option, is Giuliana, the Vegas nightclub owner who has a history with Lucious. She may be out for revenge on Anika and Cookie, the other women in his life. No matter who called CPS, the question still remains: where did Bella go? She may be in foster care, which the Lyons may not be able to find out about. The suspect could have taken her for themselves, which would also be difficult to track down. Once they find out who made the call, the Lyons would still need to get her location out of them. From the teaser, though, it seems that everyone from Hakeem to Cookie to Lucious are on top of it — and hell hath no fury like a Lyon scorned.