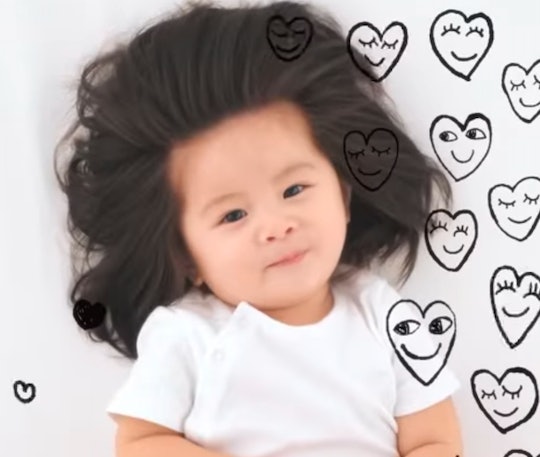 That Baby Born With Voluminous Hair Is Now Officially A Model

Just one year ago, the world was introduced to Baby Chanco, an infant with an unbelievably thick head of envy-worthy hair. Since then, she's garnered more than 300,000 Instagram followers who log on to her "hair diary" for a daily dose of cutest. Thanks to Chanco's mother, Mami Kano, every #hairgoal worthy shot is documented and shared. And with a mop of hair most people could only wish for, it's no wonder fans aren't the only ones swooning. Where is baby Chanco now? The one-year-old with voluminous hair is officially a model.

Baby Chanco is now a hair model for Pantene, as People reported, and is taking the beauty world by storm, one cute picture at a time.

Chanco is featured in new ads alongside Japanese television announcer Sato Kano, who's known for her long gray locks. The campaign is made to inspire women and who "want to be positive and make a new start through their hair," Okura told People.

"I’m so surprised with the reaction, but also very proud of the praise from many countries,” Kano told People.

Interestingly enough, Chanco and Kano have People to thank for this new development, according to The Cut, after the outlet published an article recommending the baby as the next Pantene hair model. Clearly Pantene listened. Talk about driving global sales. Everyone wants hair like that. Maybe baby Chanco can give fans some tips once she gets a little older.

One of the Internet's favorite pictures of the new hair model is a shot of Chanco in a baby carrier, according to Chicago's ABC affiliate. But in the photo, you can't see any baby, just a full head of hair.

Baby Chanco isn't the only head of baby hair to take the internet by storm. In 2016, a 2-month-old Hawaiian native, Coral, captured the internet's attention with her head of reddish brown hair, according to TODAY. Before that, there was Isabelle, who's pint-sized head of hair was compared to that of Will Ferrel's Ron Burgundy, according to Bored Panda. These babies have better hair than some adults. What are their secrets?

But, back to Baby Chanco. Will Kano ever cut Chanco's hair? It's not likely. Chanco does, however, get the occasional trim, which Chicago's ABC affiliate reported Kano refers to as a "thinning out," so it's not a total free-for-all. Kano told People that she likes to keep Chanco's hair longer so that she can style it — something you can't really do for awhile with many babies.

Kano tells Romper that, in terms of what she's hoping for the year ahead, she's going to focus on documenting baby Chanco growing up.

"I'm happy if I could record her healthy growth growing in traditional Japanese culture, regardless of the hairstyle of explosive hair," Kano says.

Will Chanco join the ranks of other famous heads of hair — perhaps Jennifer Aniston, Marilyn Monroe, or that guy from Flock of Seagulls? She's off to a pretty good start, considering she's been in the public's eye for more than half her life. Here's to more hair pics from Chanco in the years to come.

More Like This
14 Children & 1 Teacher Killed In Mass Shooting At Texas Elementary School
What Is Monkeypox & Should You Be Worried? Here’s What You Need To Know
Mom Gave Birth On The Side Of The Road... With Her Five Other Kids In The Car
This Mom Gave Birth On Graduation Day, So The University Brought Her Degree To Her