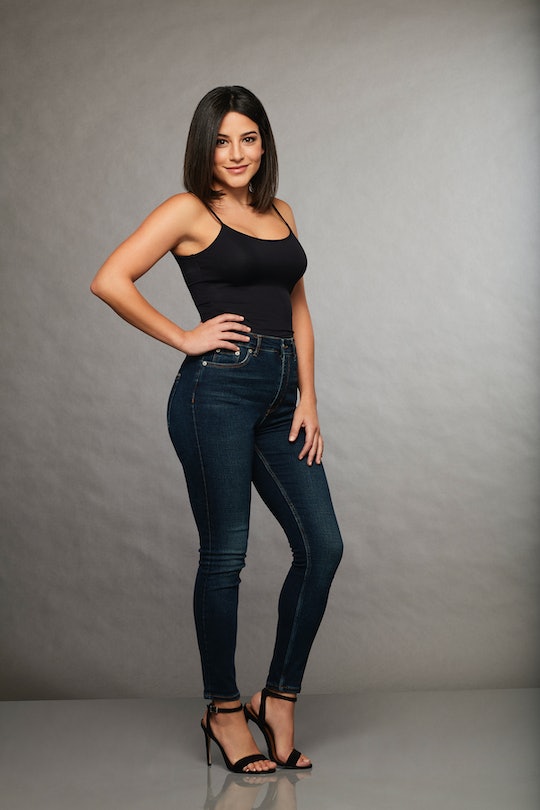 Bibiana Is Vying For Arie's Heart On 'The Bachelor'

The Bachelor is back with a blast from the past returning to dole out roses. Rather than pick one of the runners-up from Rachel Lindsay's season of The Bachelorette, producers opted instead to cast Arie Luyendyk, Jr., a former race car driver who competed on Emily Maynard's season in 2012. One of his contestants is an ex-NFL cheerleader named Bibiana Julian, but where is Bibiana from on The Bachelor? She repped her hometown of Miami, Florida while cheering for the Dolphins.

In 2006, she was named America's Sexiest Cheerleader by FHM, and she also earned the title of Rookie of the Year before going on to co-captain the Miami Dolphins squad. But since Bibiana has retired her pompoms, the 30-year-old now works as an executive assistant at MTV Miami. It's possible that Bibiana and Arie could bond over their shared experiences in professional competitive arenas that are pretty high-profile. But according to Bibiana's Bachelor bio, she actually hates football, despite being a former NFL cheerleader. In any case, both of them have pivoted to different careers for the next phase of their lives, which will probably make for some nice common ground as they get to know each other. At 30, Bibiana is also one of the contestants closer in age to Arie, who returns to the show at age 36.

Although it's not unprecedented for The Bachelor to cast someone from a long-ago season (see: Nick Viall), Arie did experience some backlash when his casting was first announced. Part of the problem is that he hasn't been associated with the franchise for five years, whereas Nick had just enjoyed something of a redemption tour on Bachelor in Paradise when his casting announcement was made. Arie isn't necessarily recognizable to newer Bachelor fans, and so it's been a challenge for them to get excited about his search for love.

Plus, there's the fact that both women who submitted themselves to be contestants and fans alike believed that Peter Kraus would be the new Bachelor. But Arie insists that his break from the show made sense for his own process and made the prospect of finding love on The Bachelor seem more natural to him.

"I’m not nervous,” Arie told Good Morning America on the day his casting was announced. He added:

Now that I’ve had some time and distance away from it, it feels like the feeling I had before I went into it the first time. I think sometimes when you’re on The Bachelorette and you jump right into being the Bachelor, for me it would’ve been too soon. This feels more natural. I’m not concerned what people think. I’m just focused on the outcome. I want to find my person and will do whatever it takes!

For her part, Bibiana has a pretty ringing endorsement from an all-important higher-up: Chris Harrison has her pegged as one of his top five contenders this season, according to People. "She spices things up with Arie and the women," he told the magazine in an exclusive interview. "She has a big personality and has her own pithy observations and judgments and she’s not afraid to make those known. She has no fears about standing up for herself or to anybody."

As we know from seasons past, the more assertive female contestants don't always make it as far as the kind ones, but it looks like Bibiana at least sticks around long enough to make an impression this year. You can catch her on The Bachelor when it premieres Monday, Jan. 1 on ABC.