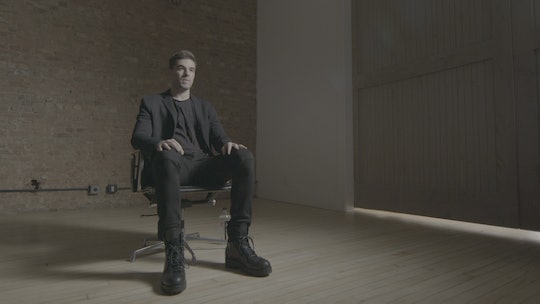 Both Hulu and Netflix released documentaries about the disastrous Fyre Festival in the same week, in which they expose the fraud, disappointment, and chaos that went down with the event. Hulu’s Fyre Fraud and Netflix’s Fyre: The Greatest Party That Never Happened detail entrepreneur Billy McFarland's involvement with the epic failure, but after hearing all the jaw-dropping details, viewers are wondering where Billy McFarland is now.

According to the Hulu documentary, Fyre Fraud, McFarland is currently serving a six-year prison sentence in federal prison. Back in October, the 26-year-old was sentenced by a Manhattan federal judge on charges of defrauding investors and buyers of nearly $26 million dollars, reported NBC News, and he is now serving his time at the Otisville Federal Correctional Institution in New York.

Representatives for Billy McFarland did not immediately respond to Romper's request for comment.

Both documentaries detail exactly how the Fyre Festival unfolded, and they include testimonials and videos exposing the disappointment and chaos party goers faced when they arrived at what they thought would be the vacation of a lifetime. In April 2017, hundreds of people flew into the remote Bahamian island of Great Exumas for what thought would be a lavish Coachella-like festival, with access to luxury accommodations, gourmet cuisine, A-list performances, and big name celebrities. Tickets to the event cost thousands of dollars, and in a marketing campaign featuring famous models like Bella Hadid and Hailey Baldwin, the festival was touted as “an immersive music festival” with “the best in food, art, music, and adventure on the boundaries of the impossible.”

The festival turned out to be more "impossible" than people expected. When ticket holders arrived on the island, they found the beaches lined with FEMA tents, stacks of wet mattresses, and no reliable infrastructure, transportation, or supplies. The didn’t get the lavish accommodations they were promised, and were served sliced bread and cheese instead of the gourmet meals they were expecting. Pictures and videos of the failed event went viral.

In the Hulu documentary, Fyre Fraud, McFarland says that the event failed due to poor planning. He claims that he had rented lavish homes and cars to accommodate the guests, but someone lost the box which contained the keys to the houses. McFarland also insists that his legal woes had nothing to do with the festival itself. “The legal situation does not involve any aspects of the execution of the festival,” he says in Fyre Fraud. “Any payments made to vendors, team members, are not in question in terms of any legal proceedings — We didn’t break the law in the execution of the festival.”

But according to the New York Times, McFarland was indicted for defrauding investors to promote the Fyre Festival, and he pleaded guilty to two counts of wire fraud in March of 2018. The outlet also reported that McFarland ran another company while on bail, which sold fake tickets to popular fashion, sports, and music events — defrauding nearly 30 victims of $150,000 — leading him to plead guilty to two more counts of fraud in July.

It looks like McFarland is now accepting some of the responsibility for the fiasco. In an interview with People he apologized for his actions, and says he hopes to “make up for some of this harm through work and actions that society finds respectable.” While McFarland serves time in prison, Fyre Festival attendees still haven’t been refunded for their expenses. Market Watch reported that as of Jan. 15, no ticket holders were refunded, but some were able to get their money back by disputing credit card charges. It’s safe to say, that the next time social media influencers tout an “impossible” event, people will be a little more skeptical.

Fyre Fraud is available to stream on Hulu and Fyre: The Greatest Party That Never Happened is currently streaming on Netflix.