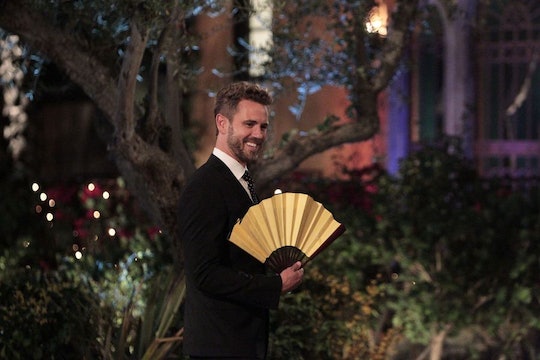 After a tumultuous trip to St. Thomas, Nick Viall decided to forego a cocktail party and rose ceremony in favor of simply mass-eliminating three women in one day. So he and his six remaining The Bachelor contestants just jetted off to their next location, the island of Bimini, which left more than a few viewers asking: where is Bimini on The Bachelor? It's actually one of the tiny islands in the Bahamas.

Bimini has two main islands, North Bimini Island and South Bimini Island, along with other smaller cays. It's the westernmost part of the Bahamas and Bimini is located just 50 miles off the coast of Miami, which means it's the part of the islands closest to the United States. Because of its proximity, Bimini was a popular destination during the Prohibition Era, and it was a major thoroughfare for the illegal rum trade at the time. It's also commonly known as one of Ernest Hemingway's favorite destinations. He lived there from 1935-1937 and the presence of his legacy is heavily felt on the islands. The Bimini Museum houses several pieces of Hemingway memorabilia. Other famous visitors who produced work in Bimini include Jimmy Buffet, who worked on his book there, and Dr. Martin Luther King, Jr., who wrote part of his Nobel Peace Prize speech there.

Bimini has strong ties to mythology, as well. The Bimini Road, which is an underwater rock formation visitors can explore, is often described as a remnant of the lost city of Atlantis, and Ponce de León included references to Bimini in his search for The Fountain of Youth. Nick and the remaining women stayed at Resorts World Bimini, exploring the islands' beaches and deep sea snorkeling with sharks. He and Danielle M. went cycling through the island on an shopping-and-eating date, mingling with locals and playing the customary international Bachelor destination pick-up ball game with local youths (in this case: basketball). Unfortunately, their chemistry never really rebounded from its mid-season slump after a strong early connection and Danielle M. went home.

Bimini may be an obscure little island to Bachelor fans (and to the women themselves, considering they cheered just a little too hard when they heard what their next destination would be), but it's probably going to enjoy a nice little uptick in Bachelor-related tourism this spring break season. There was even a well-placed ad for the resort the group stayed at that aired during the episode.