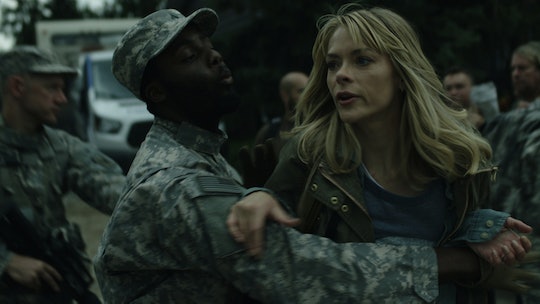 'Black Summer' Is More Than Just A Zombie Story & Here's Why

Zombies are all the rage right now — and so are revivals. Netflix has its hands in both — because there is no such thing as too many zombies or too many revivals. The world's newest zombie drama is a prequel to the popular Syfy show Z Nation — so you might be wondering — where is Black Summer set?

Don't worry Z Nation fans — you don't need to learn the history of a whole new nation to watch Black Summer — because it's set in the United States, just, you know, imagine it's post-apocalypse and the country is full of zombies. Cool? Great!

Now take the next step with me, because Hart of Dixie's Jaime King, who stars as Rose — a mother who has been separated from her daughter in the series — told Forbes that co-creator John Hyams wrote the show to intentionally parallel the events going on in the country since 2016, namely, the child-separation happening at the border. "And then our scripts, there was no mention of zombies. That was never mentioned," King said, continuing:

It was that there was this sickness and the sickness is totally and fully representative of what is happening in our country in terms of that it doesn’t matter how much you love or how much you hate … no one is immune to the separation of one another and that we’re getting infected with biases that have always been present, but that are coming up to the surface and how does each person handle something like that?

Speaking to InStyle, King explained that she was immediately drawn to the "humanness" of the role (despite the fact that it's about zombies). "It didn't feel like something that was genre; it felt like a refugee story about a woman who was ripped from her child," she said. "It’s not a story of what would you do for love, but what wouldn't you do for love?"

I'm not exactly an undead kind of girl, but King's passion about the role and the fact that it is unapologetically political intrigues me. King reinforced that Black Summer has something in it for every TV fan, no matter what your go-to genre is. "If you love horror, you’re gonna love this. If you love drama, you’re gonna love this. It’s cinematic," King said in the Forbes interview. "It’s not like this gory, horror show, it is the kind of show that when you watch it, you can’t even breathe because it’s so grounded in truth."

I'd imagine most parents can relate to the idea of doing anything (literally anything) to get back to a lost child. And even those without little ones of their own can understand the power of love. And it's become evident that the show's creators want to remind you that there are real people really separated from their children with no idea how to get them back at this very moment.

So, before you watch, decide. What's scarier to you — truth or gore? If the answer is truth, hold on tight. There may be zombies roaming around, but Black Summer feels very, very real.