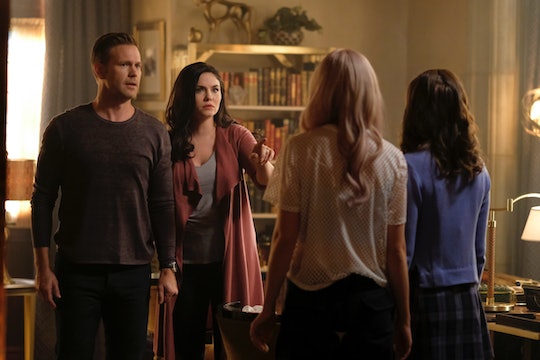 Caroline Is Going To Miss Her Daughters' Sweet Sixteen On 'Legacies'

The Vampire Diaries fans are happy to be back in Mystic Falls with CW’s new spin-off series, Legacies. It was nice to see a few familiar characters return, but there’s one hot vampire mama whose whereabouts still remain a mystery. Caroline’s twin daughters are about to celebrate their sweet sixteen without her, but it’s not like her to miss out (or plan) an event as important as this. So exactly where is Caroline on Legacies?

Apparently, she’s off on some kind of important mission. In Episode 3, Josie tells Hope that her twin sister Lizzie is extra sensitive because her mom is away on official business. “Our mom is going on these really long recruitment missions recently,” Josie says. “It’s why she’s extra testy. She just really misses her.” But fans know that Caroline would never leave her daughters unless there was something crucial at stake, especially at a time when they really need her.

In an interview with Entertainment Weekly, Legacies showrunner Julie Plec revealed that Caroline isn’t just out on a recruitment mission, she’s actually away ensuring her daughters’ safety. “Alaric knows [Caroline is] actually off doing other things that have to do with the long-term survival of their daughters,” said Plec. “So the mystery of, where is Caroline, why isn’t she coming home for their birthday, that kind of thing is gonna be part of our story in the hopes that one day we’ll be able to have her walk through the doors as well.”

So for a little background, Caroline (a vampire) gave birth to Josie and Lizzie Saltzman, but she’s not their biological mother. The twins father, Alaric — now the headmaster of the Salvatore School for the Young and Gifted — was engaged to a Gemini Coven witch named Jo, who became pregnant with the babies. But as Gemini Coven tradition goes, Jo’s twin killed her to take her power. With some witchy interference, the babies were saved and magically transferred to Caroline’s womb, and she’s been a loving mother to them ever since.

In Episode 6, “Mombie Dearest,” the twins will get to finally meet their biological mother. When talking to TV Guide, actress Kaylee Bryant (Josie) explained that the emergence of Jo may make the girls question everything, including Caroline’s whereabouts. “I discussed how heartbroken Lizzie is over Caroline not being there in Episode 3, and so when you have something as momentous as your sixteenth birthday — Lizzie has been planning her sixteenth birthday since she came out of the womb — the idea that her mom won't be there affects her greatly,” said Bryant. “Josie loves Caroline and sees Caroline as her mom, but she's never seen herself in Caroline. She hasn't seen herself in anyone up until she meets Jo.”

But the big question fans have is whether or not the Jo the twins meet is really their mom. Since the beginning of the season, the school has been under attack from all kinds of monsters, and it’s possible that Jo is just a monster pretending to be Josie and Lizzie’s mother. When talking to Entertainment Tonight, Bryant mentioned that all of Episode 6 will be about the twins struggle to accept Jo. “That is really the whole episode — really trying to figure out what the monster is and how bad can it possibly be if it’s someone that loves and cares about you,” she said. “It’s a big part of the episode and it’s something that will come to a peak. Fans will have to watch the episode to find out.”

Whether she is Jo or not, it will be nice to see another TVD character back on screen. Hopefully, fans will get some more insight into where Caroline actually is, and eventually, they may even see her back in Mystic Falls.