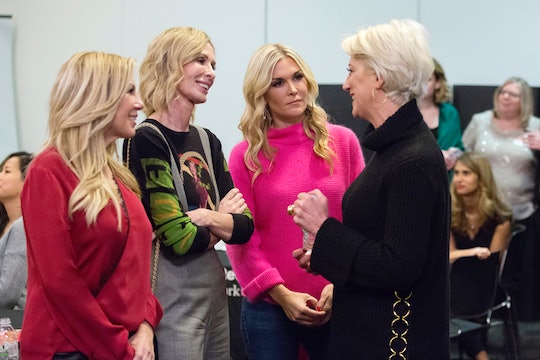 The 'RHONY' Ladies Are Living It Up In Colombia

The Real Housewives of New York City have ventured to plenty of exotic locales for group trips but Tinsley Mortimer opted to expand everyone's horizons this season by hosting a getaway to one of her favorite cities. So fans may be wondering: where is Cartegena, Colombia? The beautiful port city lies on Colombia's Caribbean coast, so the Caribbean Sea is what lends the city its gorgeous beaches and its walled Old Town dates back to the 16th century. As the ladies brave cobblestone streets while teetering in high heels, you can see the quaint colonial architecture that surrounds them and really get a sense of the city's rich history.

On the show, the gang is staying at a property owned by one of Tinsley's friends, which she says she's visited ten times. The sprawling compound features a glass elevator, a winding pool that snakes through the property, and private bedrooms for each of the cast members. (Scott, Tinsley's boyfriend, also sprang for her glam team to join her by putting them up in a nearby hotel.) But despite the luxe accommodations, not all the Housewives were completely pleased.

Bethenny, who admittedly is having a tough trip for reasons that have nothing to do with its destination, called the house "grimy" and compared it rather unfavorably to the trip she planned in Mexico last year. She claimed that the beachfront house she chose made people "feel happy" because they could walk out and look at the ocean whenever they wanted, while complaining that the house Tinsley chose for them was sub-par.

The Cartagena home was built around a courtyard with lush vegetation and it has a lot of open air areas, so it makes sense that there's some soil which could get blown around and tracked back into the house. But some of the'Wives were not pleased with the dirt. Bethenny, in particular, seemed unhappy with the house. At one point she complained to Dorinda that there were "absolutely" better houses in Cartegena they could have been staying in, to which Tinsley rightfully retorted, "Then go stay in a hotel."

Honestly, Real Housewives from every franchise find ways to nitpick their unbelievable accommodations in every country (remember Real Housewives of Atlanta's miserable stay in a Barcelona townhouse?), so it's not surprising that the cast of RHONY was making jokes. After all, these women aren't exactly known for being easy to satisfy. Take, for example, the argument that appears to ensue every time the women go on a trip and it's time to choose which bedrooms.

There may not have been any great room debate on this year's group outing, but that doesn't mean there wasn't plenty of drama. Bethenny and Carole's ongoing feud provided lots of tension between all of the women, resulting in at least one public meltdown.

The women of The Real Housewives of New York are known for their epic and often disastrous group trips from "Scary Island" to Mexico, to the Turks & Caicos where Luann memorably told her friends to just "be cool." It looks like Cartagena is no different.