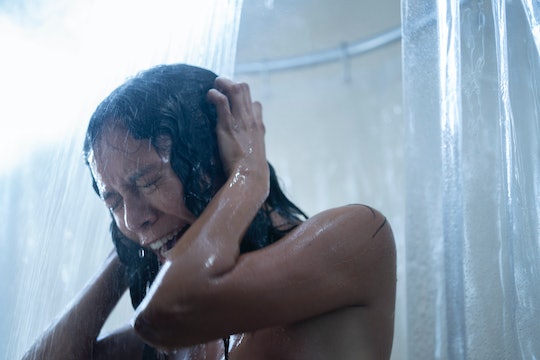 'Chambers' Sets The Stage For A Very Creepy Story

There's a lot to focus on in the trailer for Netflix's Chambers. It's a cacophony of creep, complete with eerie eye contact, blood dripping suddenly from nowhere, and rats crawling out of someone's exposed chest cavity. But it's also got some stunning vistas! If you found yourself focusing on the scenery instead of the skin-crawling horror, you might be wondering where Chambers is set.

The series, which premieres on Netflix on Apr. 26, is set in Arizona. According to TV Guide, that location is actually very important to the story for more than just visual reasons. Chambers follows Sasha, a teenager who lives and attends school in Cottonwood until a series of events alters her life forever. She suffers an unexpected heart attack one night that results in a transplant (is that...typically how heart attacks are treated?), but this isn't a run of the mill medical drama. Far from it.

Things take a turn for the supernatural when Sasha begins to experience the memories of the girl, Becky, whose heart beats in her chest. And soon she finds herself becoming entangled in Becky's life in other ways when Becky's parents offer Sasha a scholarship to the high school in their area, Crystal Valley.

The differences in Sasha and Becky's lives — and locations — bring up issues of class and circumstance that only serve to further complicate the story. Sasha is Native American, though she's disconnected from the Diné traditions that her boyfriend TJ takes so seriously. Becky is an affluent white girl with New Age-y parents. Becky takes over Sasha's life on multiple levels, not only invading her body but fueling a crisis of identity. The Cottonwood vs. Crystal Valley dichotomy makes that very literal.

While Cottonwood, AZ is a real place, it doesn't look like there's a Crystal Valley in the state (Arizonans, feel free to call me out). There is a Crystal Valley Court in Tucson, so perhaps Becky's family lives in a gated community by that name, which would certainly fit the vibe they have in the trailer. It's unclear whether or not Chambers was filmed in the same locations where it is set, however. Details about the production haven't been made public, so it's difficult to say if it was shot in Arizona or just a very similar corner of California. Those views do look pretty convincing, though.

Per Entertainment Weekly, series creator Leah Rachel said that Chambers took place "in a mystic, New Age pocket of Arizona." Though it starts off as a psychological horror story that's grounded in real human problems, it ultimately becomes "something far more strange." Rachael explained that it was really about the "different ways we metabolize trauma."

If the series takes advantage of its setting, then it could imbue the story with some really specific details that make its world feel even richer. Sasha's home sounds like it's a big part of who she is, which makes it even more horrifying when Becky and her parents creep into her life.