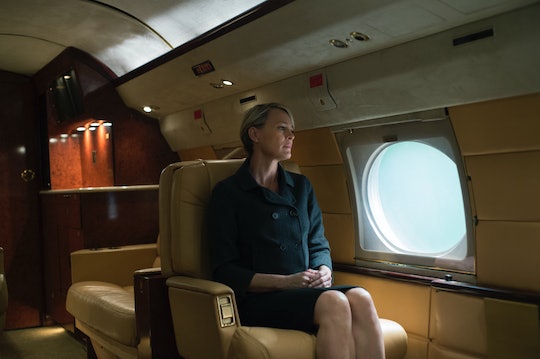 Where Is Claire Underwood In 'House Of Cards' Episode 1, Season 4? She's Not With Frank

The only thing that has me excited for the 2016 election cycle is the fact that Frank Underwood is gunning for the White House again. But when Season 4 starts out, there's one faction of the Underwood camp noticeably absent from the campaign trail. I know I'm not alone in asking where is Claire Underwood in House of Cards Episode 1, Season 4, because, you guys, seriously? Where is Claire? When the show starts out, Frank is in the middle of a high-energy speech at a campaign rally in New Hampshire, promising better jobs and a brighter future if he's elected again for a second term, but Claire is nowhere to be found. And when we do catch up with her, it's not like she's backstage waiting for her cue: she's states away, in Texas. (A fact revealed to Frank courtesy of Doug just after he walks off stage.) But why?

It's not immediately clear why Claire took off to Dallas, Texas, but if the finale of Season 3 was any indication, it's very clear that things between Frank and Claire are no good. To recap, Claire walked out on Frank in the volatile Season 3 finale, which was a move all of us simultaneously didn't see coming but definitely saw coming after the way sh*t from every possible direction just hit and splattered all over the fan. As it became increasingly obvious to Frank and his camp that he needs Claire on the campaign trail if he's going to even have a shot at winning the White House again, it's also became pretty damn clear that winning the White House is a part of the Underwood Master Plan that only serves Frank's best interests, not hers. In Seasons 1 and 2 the Underwoods were very much a diabolical team, but ever since Frank assumed the Oval, it's become more about focusing on his vision, and less hers. (Though the argument could and likely has been made that Claire knew exactly what she was getting into from day one, it's still devastating to watch that reality hit home for her as Season 3 unfolds.) The episode culminates with Claire saying, “I’m not going to New Hampshire. I’m leaving you.” And she does. But all that brings us to Season 4 and, maybe not surprisingly, to Dallas, Texas.

If you remember from the earlier seasons, Claire is originally from Texas, so both literally and figuratively returning to her roots signals a pretty big plot point in her character development this season. The house she enters is her own, the one she grew up in in a pre-Frank Underwood world, the home that built a very different, very determined Claire. Yet it's barren and lonely. Sheets cover the furniture and as she walks the halls, the only company is the echo of her steps. It's perfectly light outside, which only further adds to the ominous feel of the dark scene on the inside. And as Claire traces her steps, there's a huge painting of her late dad hanging above a mantle that gives her pause. A live-in caretaker (a butler? a home aide?) greets her as she enters, and when Claire asks, "where is she?" the questions swell. Who is 'she'? Her mom? Her sister? Does Claire have a daughter? Some career-ending secret she and Frank have been keeping under literal lock and key?

Whoever it is, it's pretty clear that Claire's sabbatical in Dallas is about to get a whole lot more interesting ... for everyone involved.