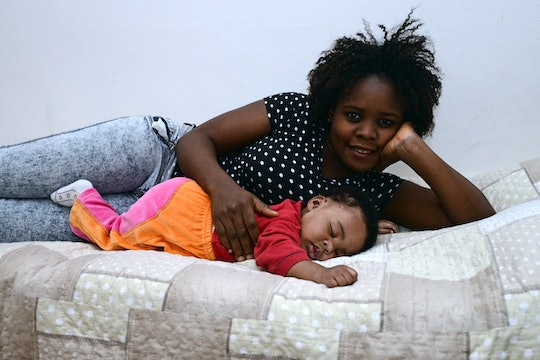 Co-Sleeping Isn't A Crime, But Certain States Are Cracking Down On Dangerous Sleep Habits

Co-sleeping is one of those epically controversial parenting topics like breastfeeding, attachment parenting, and the merits of Ferberizing (a.k.a, the "cry it out" method of sleep training). In most instances, these discussions about parenting styles and choices don't involve the law — except for co-sleeping. Believe it or not, some parents have been charged for co-sleeping with their child. Is co-sleeping illegal? Well, it's a bit of a loaded question. While the act itself has not been criminalized, parents whose children have died as a result of co-sleeping accidents have been charged with everything from child endangerment to homicide.

In Pennsylvania last week, 28-year-old Jessica Harper was charged with criminal homicide in the death of her 2-month-old son, allegedly as a result asphyxiation from co-sleeping. According to police, Harper's first child also died from positional asphyxiation due to co-sleeping; That child's sex and age have not be released. Across the country that same week in Oregon, a 5-week-old newborn died from positional asphyxiation associated with co-sleeping. Charges have not yet been filed against either parent, but Baker County authorities are actively investigating the baby's death. What these tragedies illustrate is that even when parents take the best precautions while co-sleeping, infant death is a real risk — and one that could put parents in prison.

According to Lawyers.com, parents have been charged in the following states for the deaths of their infants as a result of co-sleeping: Minnesota, Georgia, Pennsylvania, and Wisconsin. Parents in Utah have also been charged with co-sleeping-related infant deaths. While prosecutors are more likely to press charges if a baby is smothered while co-sleeping with an intoxicated parent, convicting those parents is often difficult, given that many juries feel the loss of their child is enough punishment for grieving parents.

But the issue of infant deaths while co-sleeping is a real threat. According to Centers for Disease Control and Prevention, approximately 3,500 children die suddenly and unexpectedly every year in the United States. The CDC advises against co-sleeping, specifically:

Have the baby share your room, not your bed. Your baby should not sleep in an adult bed, on a couch, or on a chair alone, with you, or with anyone else.

While co-sleeping itself hasn't been criminalized, some legislators feel it should be. Take for example Wisconsin state legislators Rep. Samantha Kerkman and Sen. Alberta Darling: They each introduced a "co-sleeping bill" within their state House and Senate, respectively. The bill aimed to make the injury or death of a child as a result of co-sleeping while intoxicated a felony offense. The joint bill was originally introduced into Wisconsin's state legislature in 2013, and has failed to pass each session — this year included.

The American Academy of Pediatrics — widely considered the leading parenting authority in the United States — has come out against co-sleeping. And yet, as these tragic cases illustrate, parents still choose to co-sleep with their children — as is their right. But parents also must remember, if they do choose to co-sleep, it's also the state's right to seek prosecution if their child dies from co-sleeping.