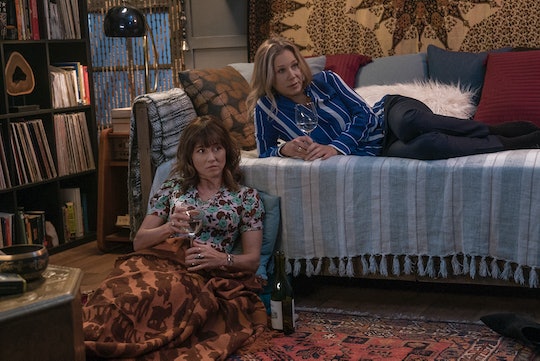 In the trailer, we get a glimpse of the ocean in the background of their outdoor balcony staged support group, which looks very Malibu-esque, and Jen can also be spotted going for a run in what looks like the Hollywood Hills. Add in the gratuitous hot surfer establishing shots, a scene where Jen and Cardellini's character Judy plop down on the beach to share a joint, and the fact that Judy moves into Jen's guest house à la The OC, and it seems like a pretty safe bet that they're in the general vicinity of Los Angeles. Even the poster for the series evokes affluent Southern California wine moms.

In the series, Jen, who has just lost her husband in a violent car crash, seems to be struggling with the grief process — not because she's overwhelmed with emotion, mind you, but rather because she doesn't seem to be feeling much at all. She's sardonic and dismissive, and, needless to say, she isn't great at receiving sympathy or support. But Jen is clearly struggling, so she attends a support group where she meets another young widow named Judy.

Judy is a free spirit, goofy and pretty eccentric, but for some reason, Jen finds herself drawn to her. The pair have a very Grace and Frankie vibe together, if Grace and Frankie were half their age and had dead husbands instead of gay ones. But Judy is far from a mystical healer sent to teach Jen how to get her groove back. She appears to have her own dark secret that leaves the FBI (led by James Marsden) on her tail. Is she really a widow or just a grifter who found a very palatial hideout in a grieving woman's guest house?

The series comes from creator and executive producer Liz Feldman, who also wrote for 2 Broke Girls, The Ellen Degeneres Show, and Blue Collar Comedy. In 2015, Degeneres executive produced Feldmen's first series One Big Happy, but the network sit-com fizzled out after just six episodes. Kate Adler, the head of comedy at CBS TV Studios, which produced Dead to Me for Netflix, talked to Deadline about a passion project of Feldman's back in January. "She told a really dark comedy that I would probably best describe as a comedic Big Little Lies," Adler said in the interview, presumably talking about Dead to Me, which was still in development at the time. "It was a plot-driven, really dark comedy that was clearly not meant to be on network, it was clearly destined for premium cable, or streaming."

If it sounds up your alley, Dead to Me is now streaming on Netflix.