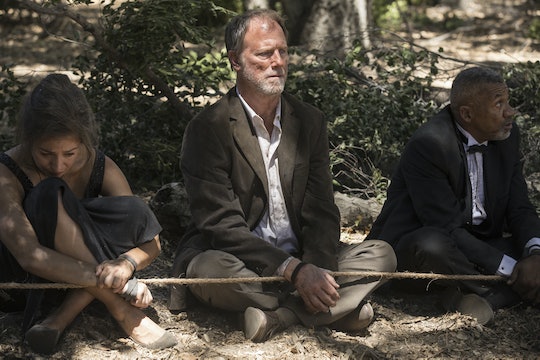 Delos Has Big Plans For Peter Abernathy On 'Westworld'

Throughout the first few episodes of Westworld Season 2, Delos employee Charlotte Hale has been consumed with locating Peter Abernathy after uploading an important file to his head in Season 1. Formerly assigned to be Dolores' father, Peter spent most of last season in cold storage after malfunctioning in the pilot. He was M.I.A. in the second season until Charlotte finally acquired him in Episode 3. But where is Delos taking Peter Abernathy on Westworld?

It's difficult to say for sure. Season 2 has followed two distinct timelines, as is usually the case on Westworld: one takes place in the immediate aftermath of Dolores' rebellion and the other about two weeks later. So far, Peter has only been present in the former timeline. Mistaken for a guest, he was rounded up and taken prisoner until Dolores spotted him and moved him somewhere more private. She tried to get through to him, but his mind had been mangled by his previous programming. Bernard took over working on Peter in an attempt to help and in the process managed to de-encrypt Charlotte's file. But not long after, Delos snapped Peter up.

The initial plan, before Dolores' massacre of the guests, had been to get Peter on the train out of the park. He would presumably be picked up by Delos so they could take him back to their headquarters and access the file, which contained all of Robert Ford's intellectual property from the past 35 years. That might still be the plan.

In the Season 2 premiere, Charlotte was unable to guarantee a rescue from the park until she delivered "the package" (a.k.a. Peter) to Delos. It seemed like regardless of what was going on within Westworld, they still wanted the information Peter contained more than they wanted to keep their employees safe. If he's such high priority, then it stands to reason that once he was found, he was taken out of the park and sent along to HQ, wherever that might be.

However, viewers only just caught up with Charlotte in the Two Weeks Later timeline in Episode 3, and it did seem like the plan might have changed somewhat. She was still in the park, after all, and hadn't been airlifted out despite completing her mission. There is a lot the audience doesn't know about that fortnight, too; maybe Peter escaped and got lost again, or Dolores stole him back. She was eager to reconnect with her android father. Perhaps Bernard's work on Peter corrupted the file or prevented Delos from accessing it. If Charlotte is still in Westworld, then there is a chance Peter never left, either.

But even if the scheme never came to fruition, it seemed as though Delos' intention was to take Peter out of Westworld. The company appears to be quite powerful (or at the very least quite rich considering all the cutting-edge technology at their fingertips), which means they could have offices in every major city as far as anyone knows. Thanks to context clues, audience members have speculated that the parks are located on islands in the South China Sea. If Delos was only trying to get Peter to their closest site, then that could mean somewhere in China.

As of right now, there's no way to know if Delos' plot to remove Peter from Westworld was successful in the end. Like Charlotte, he might be hanging out in the on-site headquarters waiting to be taken out once and for all. There are any number of possibilities and until the show provides a little more information, fans can only guess at Peter's ultimate fate.