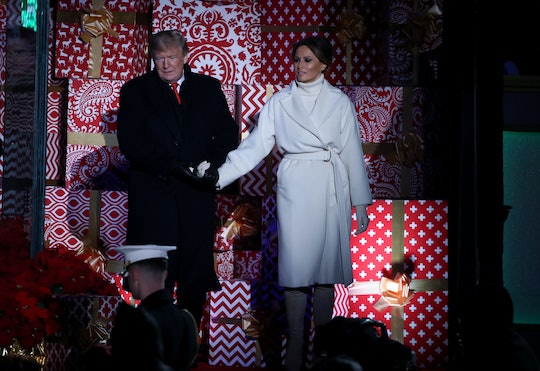 Where Trump Is Spending Christmas 2018 Won't Surprise Anyone

If you could spend Christmas anywhere in the nation, where would you choose? Most of us would probably decide to find somewhere we could be with friends and family, and that hopefully reminded us a little bit of the comforts of home. And it seems that may be why President Donald Trump is spending Christmas 2018 in his second home down south.

President Trump could literally go anywhere for the Christmas holiday (well, anywhere that could accommodate the phalanx of security that goes with him) but like most us, he chooses to spend it at home with his family. Not the White House, that is, and not even his penthouse in New York City. No, according to Quartz, for the winter holidays the president likes to jet off to the so-called winter White House — that’s his Mar-a-Lago home in Palm Beach, Florida.

At least that’s what Trump did in 2016, when he was president-elect, and again in 2017, according to The Atlanta Journal-Constitution. The president and first lady arrived in Florida on Dec. 22, 2017 where he was greeted by well-wishers and fans who lined the streets, the outlet reported.

But the holidays at Mar-a-Lago don’t come without some controversy.

A former White House ethics lawyer told the Associated Press that the exclusive private club is “a place where, for sky-high admissions fees, business executives who have strong interests before the government can literally engage in purchasing access to the president.” That doesn’t seem to be a criticism that bothers the president; he’s visited the property at least 18 times since his inauguration, according to Town & Country, including the trip he took in November 2018 for Thanksgiving.

For Christmas in 2017, most of Trump’s family was able to join him, according to the Express. Ivanka Trump and Jared Kushner were not there, as she converted to her husband’s Jewish faith prior to their marriage; the couple doesn’t celebrate Christmas but chooses to travel during the holiday instead, Express reported. Ironically, Ivanka's mother, Ivana did seem to be there enjoying time with her grandkids, according to the Daily Mail. Trump released a photos showing some of his grandchildren posing with Ivanka's mother, the children's great-grandmother.

For everyone who could make it to the event, it sounds like the holiday was very traditional. Trump and the first lady usually attend a Christmas Eve service at the episcopal church where they were married, according to WPTV. Christmas gifts are presumably opened on Christmas morning, and the family is bound to have a feast. For Thanksgiving the menu that was announced included main dishes like turkey, beef tenderloin, lamb, and salmon, a variety of salads, a chilled seafood station, and other dishes like short ribs, sea bass and snapper ,according to Newsweek. After the food coma, nobody is quite sure what the family does since it’s about the only thing the president doesn’t seem to announce on his Twitter feed.

But who knows, perhaps this holiday, the POTUS will pen a telling tweet?