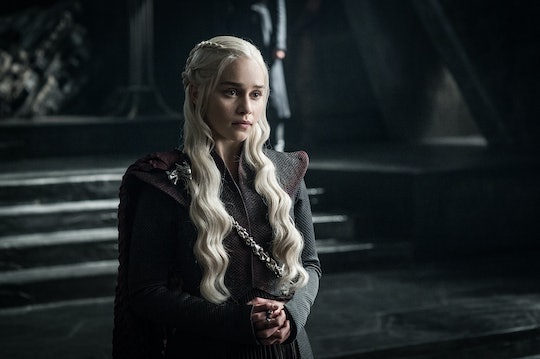 Dany Could Use Dragonstone's Location To Her Advantage On 'GoT'

In Season 7 of Game of Thrones, Daenerys Targaryen will finally return to Westeros, a country she left as a newborn infant and hasn't seen since. But promotional information seems to indicate that she's not just washing ashore anywhere in Westeros: she's landing at Dragonstone, the ancestral home of the Targaryen family. It was taken for the Baratheons after Robert's Rebellion and now it's Dany's again. But where is Dragonstone on Game of Thrones?

Location is important, particularly because it's such a key factor in the ongoing battle for the Iron Throne. For example, the North has been difficult to hold because of its distance from the capital and its harsh conditions, allowing Robb and Jon to be declared kings of the region and letting them launch a campaign against the current ruler. So the location of Dragonstone could either help or hinder Dany in her bid for total control of Westeros.

Dragonstone is located on an island of the same name in Blackwater Bay, where Tyrion burned part of Stannis' fleet with wildfire prior to the Battle of Blackwater. If you look at a map of Westeros, it's clear that Dragonstone is in the South; in fact, it's not too far from King's Landing.

Dragonstone's proximity to King's Landing could give Dany an edge when it comes to trying to wrest the throne away from Cersei. However, even more than that, the castle of Dragonstone itself is an advantage. It's a nearly impenetrable fortress built using long, since-forgotten techniques of Valyrian stonemasonry. That, along with its relative isolation on the island, means that it's difficult to breach. It could offer Dany quite a lot of protection by keeping her enemies out.

But that's not the only benefit to Dragonstone and the island it sits on. It's also where a vast mount of dragonglass (or obsidian) can be found. As the one thing known to effectively destroy the White Walkers, having access to dragonglass could become increasingly important. Many fans are looking forward to the day Dany meets Jon Snow, and her ability to provide dragonglass could be another big selling point of their eventual alliance.

Dany will likely be in a good position to plot her next move once she lands at Dragonstone, considering it's a powerful stronghold sitting on a store of highly useful obsidian. Dany's sizable fleet and relative closeness to King's Landing means Cersei is going to have to watch out. Dany's chances are looking better and better.