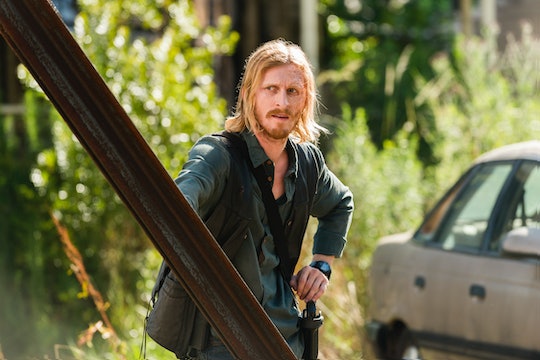 Where Is Dwight On 'The Walking Dead'? He Could Be Laying Low

Though the midseason finale of The Walking Dead Season 7 tied up a lot of loose ends, it left one thread hanging. Dwight was nowhere to be seen for the episode's entire hour and a half runtime, even though there was plenty of commotion going on at the Sanctuary. He didn't accompany Negan to Alexandria, either. Despite that, Dwight may have had an impact on the events of "Hearts Still Beating" that could have lasting consequences — and not necessarily bad ones. Dwight is a character who becomes important in the comic series that the show is based on, which means he's a character to keep a close eye on. So where was Dwight on The Walking Dead?

One popular theory is that Dwight was responsible for letting Daryl out of his prison cell by leaving him the encouraging note and helpful key that allowed Daryl to flee. The note and key were left anonymously, which would make sense if it was Dwight; he would have a lot to lose if it was discovered that he was helping prisoners. There's also another key clue that Dwight could have been the one to help: the key that was given to Daryl was for his old motorcycle, a.k.a. the very bike Dwight had been cruising around on. So if Dwight was the jail-breaker in question, he may have been laying low in the aftermath to avoid suspicion. That could be why he was missing from the episode.

Then there's the possibility that viewers did see Dwight in the midseason finale after all. Throughout the episode there were appearances by an unidentified person spying first on Rick and Aaron, then on Father Gabriel at Alexandria. There is a chance that this person was Dwight. In the comics, Dwight decided to be something of a double agent, meeting with Rick, Jesus, and Ezekiel to plan out how to take Negan down. Dwight is obviously no fan of Negan's considering the whole wife-stealing, face-ironing situation and that mystery lurker might just be Dwight scoping out the scene to make contact before he switches sides.

Now that Rick has been revitalized, it seems fair to assume that the second half of Season 7 will be all about fighting back. If that's true, then Dwight making the shift from Savior to ally would fit right in as a storyline. He may be laying low now, but odds are he'll be important later.