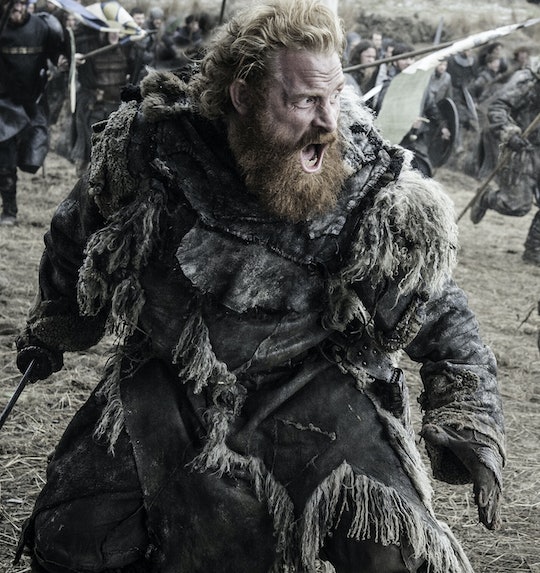 This 'Game Of Thrones' Location Could Become Important

There was a lot going on in "Dragonstone," the first episode of Game of Thrones' seventh season, what with all of the characters getting ready to kick it into high gear. Plus, even with the main cast having been drastically reduced at the end of Season 6, there's still way too many people, places, and things for most of us to keep track of. You may or may not therefore have missed a key detail relating to the geography of Westeros that flew by on Sunday night. So where is Eastwatch-by-the-Sea on Game of Thrones? Viewers might be getting a closer look at this location in the near future.

In last week's episode, Jon, now the King in the North, asked that the Wildling army, now led by the sassy and classy Tormund Giantsbane, head to Eastwatch to stand as the first line of defense against the oncoming White Walkers. Eastwatch-by-the-Sea is the easternmost castle on the Wall; it's also the port for the Night's Watch, being the place at which the Wall meets the sea.

If that's starting to sound familiar, it's because elsewhere in that episode, The Hound saw a terrifying vision while staring into a fire alongside Beric Dondarrion: "The Wall... It's where the Wall meets the sea. There's a castle there. There's a mountain, looks like an arrowhead. The dead are marching past, thousands of them." By the sound of it, he appears to also be talking about Eastwatch, which doesn't sound good for poor Tormund, not to mention the rest of Westeros as a whole.

As much as I was kind of hoping he was just messing with Beric, it looks like that was a real vision which, if things go just wrong enough (and they usually do), puts Tormund and the other Wildlings in some serious danger. Sending them there was a smart move on Jon's part — Eastwatch is the closest castle to Hardhome, the Wildling village where Jon encountered the White Walker army in one of the show's most harrowing scenes of all time. But still, it could mean he's sending them right to their deaths.

The Wall, as you're probably aware, has kept the White Walkers out for thousands of years. But it's starting to feel like that's not going to last too much longer, between The Hound's vision and the fact that, well, the plot has been building up to it since the first scene of the very first episode. The White Walkers are most likely going to cross over into Westeros at some point soon, and it looks like they'll be stopping at Eastwatch-by-the-Sea on the way. All fans can do for now is just strap in, stock up on dragonglass, and pray to the Seven that Tormund makes it out alive so he and Brienne can finally get together.