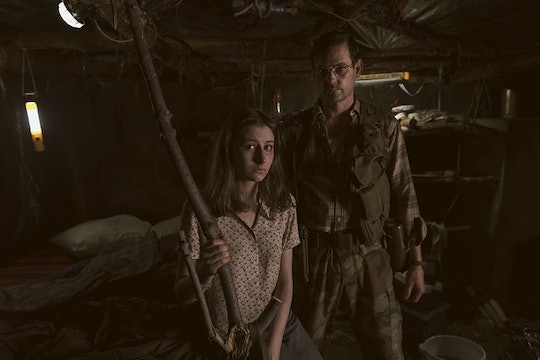 Here's Where 'Girl In A Bunker' Elizabeth Shoaf Is Today

On Memorial Day 2018, Lifetime will air an original movie based on a disturbing but nevertheless true story. Girl in the Bunker depicts the 10-day ordeal suffered and survived by 14 year old Elizabeth Shoaf after she was abducted by Vinson Filyaw on her way home from school. The events occurred in 2006, but where is Elizabeth Shoaf today?

Shoaf has mostly kept out of the public eye over the last twelve years. Now twenty-six, she has spoken a few times about what happened to her in an effort to raise awareness, but otherwise seems to live a private life. However, a documentary special will accompany Girl in the Bunker on Lifetime that allows Shoaf to recount what happened in her own words, complete with news footage and interviews with her parents and police. Since it's Shoaf's story, it's important to hear her tell it. And she might even offer an update about her life now. Viewers can find out for themselves when Elizabeth Shoaf: The Girl in a Bunker airs directly after the movie at 10 P.M.

Shoaf has commented on her abduction before, telling WISTV in 2013, "It's just a remembrance. I use it to keep me strong. I survived and I can help others survive."

WISTV reported that Shoaf felt she had moved on from what happened and was being proactive in trying to prevent the same thing from happening to other people. She spoke to mothers and daughters at the Lugoff-Elgin Middle School in her native South Carolina about being "cautious and aware of strangers." She also wanted them to be able to plan for any eventuality, which was why she had partnered with the Kershaw County Sheiff's Department, Kershaw County Council, and Genova Family Karate to encourage self-defense training. Shoaf said:

Unfortunately, we can't stop it from happening, but we can reduce it if parents are more cautious of what's going on and who's around.

Shoaf had been kidnapped after Filyaw approached her posing as a police officer. He handcuffed her under the guise of arresting her for marijuana possession, then led her through the nearby woods until they arrived at the bunker he'd built underground near his trailer. CNN reported that to deter her from trying to escape, Filyaw said the hideout was "rigged with explosive booby traps." Once inside, he chained Shoaf up and raped her repeatedly.

Over the course of her ten days in the bunker, Shoaf did what she could to survive, even though she was terrified. As she told MS News Now in 2013:

I just didn't know what to do. Just scared I was going to die. Most people do. Day to day life was wake up, get assaulted. Couple hours later, if that. He sexually assaulted me many times throughout the day.

She was eventually able to get Filyaw to trust her after talking with him and pretending to be friendly; he even began to allow her to use his phone to play games, though as soon as he fell asleep she texted her mother for help. It guaranteed her rescue: Filyaw fled in fear, which allowed Shoaf to escape and return home. Filyaw was caught and sentenced to over four hundred years behind bars for kidnapping, rape, possession of explosives, and impersonating an officer.

According to MS News Now, Shoaf was working as a dental assistant in 2013. She said that she "felt normal" and got to engage in all the same things as other woman her age: she worked, played video games, and hung out with friends. She was also learning self-defense at the Genova Family Karate Studio. She continued to tell her story as well.

If you've been through anything, you can still make it. You can be a survivor just like I am. It simply takes faith, it takes talking to someone and encouragement that it's not the end of the world.

Shoaf survived an unimaginable situation and has made a life for herself in the aftermath, which is more than impressive — it's inspiring.