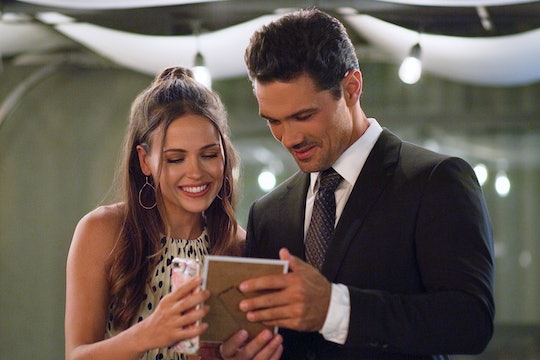 Hallmark Channel's 'From Friend To Fiance' Revamps A Classic Story

The fourth installment of Hallmark Channel's Countdown To Summer original movie series serves up some classic My Best Friend's Wedding vibes, but viewers tuning into the rom-com may be wondering where From Friend to Fiancé is set. The made-for-TV movie doesn't reveal a specific location in its official synopsis, but I do know from the cast members' Instagram accounts that the movie filmed in Toronto.

From Friend to Fiancé follows Jess Parks, a successful single woman in her early 30s who has great friends and a cool job in ~the city~. But when she and her childhood best friend Ted return to their suburban hometown to catch up, she learns he's marrying Kimberly, their former high school mean girl and Jess' nemesis. So while the settings are relatively important to the story, it seems like the whole movie takes place in a fictional town.

Complicating matters is that Ted was mercilessly bullied in school, so now that he's grown into a new physique and a successful career as a businessman, he has quite a bit of ego invested in having landed Kimberly. Jess is obviously irritated by the match but, much like My Best Friend's Wedding, when Ted asks her to be his "Best Woman," she's stuck planning the wedding of her nemesis to her best friend. As you can imagine, big feelings ensue.

Jess realizes she has romantic feelings for Ted, but can she admit them before it's too late? And will it matter even if she does? "Everybody’s got a classic case of doing all the right stuff, for all the wrong reasons," actor Ryan Paevey, who plays Ted, told Soaps In Depth. Daytime soap fans might recognize him as General Hospital's Detective Nathan West, but Paevey is a Hallmark Channel Original Movie alum, too. He starred in 2017's Harvest Love and played the titular role 2016's Unleashing Mr. Darcy.

Jocelyn Hudon, who plays Jess, also has another Hallmark Channel Original Movie called Eat, Drink, and Be Married in post-production slated for a 2019 release. Meanwhile, Kelly Kruger, who plays Kimberly, is a fellow daytime soap alum, too, playing Mackenzie Browning Hellstrom on CBS's The Young and The Restless. Paevey went on to tell Soaps In Depth that having a soap opera background was actually super helpful to doing Hallmark Channel Original Movies, because they're made so similarly.

These movies are like the film equivalent of soap operas from a work standpoint: super long days, lots of dialogue, long hours… But it’s good to work with soap peeps like Kelly because we’re used to that. It frees you up to just have a good time on set because everybody’s relaxed.

He added that he, Kruger, and Hudon "were like old friends from day one," and Kruger revealed in an Instagram post that he actually bought all the women on set matching necklaces, which is pretty adorable. Hopefully, the trio's instant connection translates to great on-screen chemistry.

From Friend to Fiancé premieres Saturday, May 25 on Hallmark Channel.