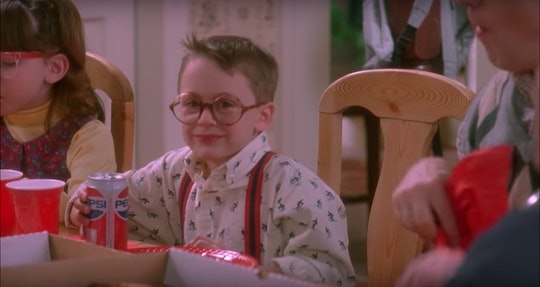 Here's What Fuller From 'Home Alone' Looks Like Now

Home Alone changed the face of Christmas movies forever, and since then, people have wonder what happened to the kids who acted in the now classic holiday film. In the case of the actor who played Fuller, Kevin's bed-wetting cousin, nothing but bigger and better things have come knocking at his door. So where is Fuller from Home Alone now? Kieran Culkin, who portrayed the unforgettable role, has enjoyed a long and prosperous acting career since his humble beginnings as one of Kevin's many, many family members.

Perhaps you already knew this (I didn't), but Kieran is actually Macaulay Culkin's real life younger brother. The two siblings were undoubtedly the most successful actors in the family, though three of their additional five siblings also went into the acting business as well. After Home Alone and Home Alone II, Kieran has had starring and prominent roles in several movies throughout the years. In fact it's almost a guarantee that you recognize him from somewhere.

For me the realization came when I figured out that I recognized him as Simon Boggs from She's All That. But you might have a different a-ha moment, depending upon what projects of his you've seen. Basically, this guy has been a consistent part of Hollywood since the year 1990.

Some of his most notable roles include starring as Igby in Igby Goes Down, as Wallace in Scott Pilgrim Vs. the World, Buster in The Cider House Rules, and Neil in Movie 43. Recently, you may have seen him in the critically acclaimed series Fargo in a multi-episode arc as Rye Gerhardt. He's also acted in a few quirky project recently like Infinity Baby.

Suffice to say, Kieran has been extremely busy in the past several years, which is why you may not even have realized that he was even in Home Alone or that he had such an iconic older brother. Now that I've looked so much into his career, I'm kind of wondering why we don't all talk about him as much as we talk about Macaulay.

In an interview with The Guardian when Igby Goes Down was released, Kieran talked a bit about remaining in the spotlight. "Fame doesn't have to make you crazy," he explained, adding:

It can be done — there's actors who go to baseball games every day. My brother was nine years old, he didn't know what the hell was going on and he was huge. So it's easy for me to see what I don't need. I don't do this for fame, I do this to be good. I'm sane. I'm pretty proud of that, I guess!

After his star turn in Igby, the actor took a break from acting for a couple years, taking some time to figure out if it was really what he wanted to do with his life since he was too young when he started out to know what he really wanted. "I was just sort of young and went with the flow," Kieran explained to Interview Magazine. "It wasn’t like I was 6 and knew I wanted to be an actor. I was thinking more along the lines of, I’m 6." He added:

When I was 20 I realized, I’ve never really thought about what I want to do. So I took a bunch of time off, stopped answering my phone, stopped doing anything. I’m pretty sure this is what I want to do, but I needed to be sure. It took me about two years to come around.

A few years after that interview, he starred in the cult-favorite Scott Pilgrim Vs. the World alongside fellow superstars Anna Kendrick and Michael Cera, playing Wallace. As for what's up next for this former child star? Who knows, but I'm excited to see.