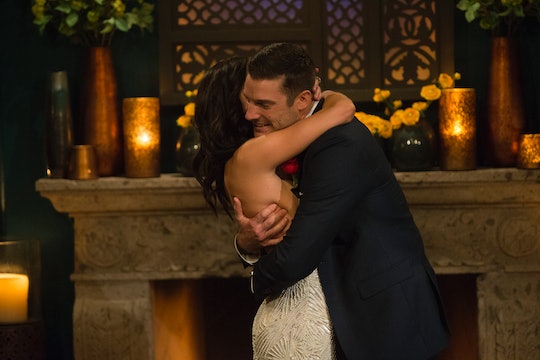 This Explains Why 'Bachelorette' Contestant Garrett Is So Outdoorsy

There are a few front runners on The Bachelorette so far, but one that stands out is Garrett. He seems like he’s going to be in the competition for awhile, so where is The Bachelorette's Garrett from? The first impression rose winner loves the outdoors.

According to his ABC biography, Garrett is a medical sales rep currently in Reno, Nevada. A website called OK! Here's the Situation lists Garrett’s (last name Yrigoyen) hometown as Manteca, California and the University of Nevada as his alma mater, which is probably why he settled in Reno. The ABC bio states that Garrett was "raised in a small town in Central California, Garrett is a true outdoorsman who loves fly fishing, hiking and snowshoeing." It emphasizes his love of the wilderness, too: “When he's not on an outdoor adventure, he's perfecting his Chris Farley impression. He's excited to find love with the Bachelorette… down by the river!"

The Bachelorette, though? The last three Bachelorette first impression roses predicted each season’s winner: Kaitlyn Bristowe and Sean Booth; Jojo Fletcher and Jordan Rodgers, and Rachel Lindsay and Bryan Abasolo. Of course, they are not required to choose who they gave this rose to and I doubt these three women consulted each other on the matter, but the pattern is definitely striking. This is why some fans believe that Garrett could be the one to win it all this season.

Another reason Bachelor Nation may believe this is because of the controversy surrounding him. On the night of the premiere Garrett was called out for allegedly liking gross social media posts — racist, sexist, xenophobic... you get it. Garrett deleted his existing social media and created a new Instagram, where he posted an apology:

"To those who I have hurt and offended: This is all new to me. I went on the Bachelorette for the adventure and possibility of falling in love, not fame," he wrote on his new Instagram. "I did not know what to expect once the show aired. I am sorry to those who I offended and I also take full responsibly for my ‘likes’ on Instagram that were hurtful and offensive."

Garrett argued that he started a new account as a symbol of his new outlook. He continued, "garrett_yrigs12 was my former Instagram handle and I decided to take it down and start fresh because I have learned an extremely valuable lesson and am taking steps to grow, become more educated, and be a better version of myself."

In the age of social media, it’s becoming easier to discover the dark sides of contestants just like this. In some cases, the lead condemns it. This is what happened last year when contestant Lee Garrett on Rachel’s Bachelorette season was found to have written racist and sexist remarks on Twitter. He also didn’t make a huge announcement that he was starting fresh on social media, either.

Becca, though, has had the opposite reaction of what some viewers expect. In an interview with ET, Becca reacted to Garrett's posts by saying that she "couldn't fault anyone for what they believe" and that she wants viewers to have an open mind. Does this mean that Garrett wins it all? It's not certain, but may be his fly-fishing and jokes make Becca swoon enough for him to earn the final rose.