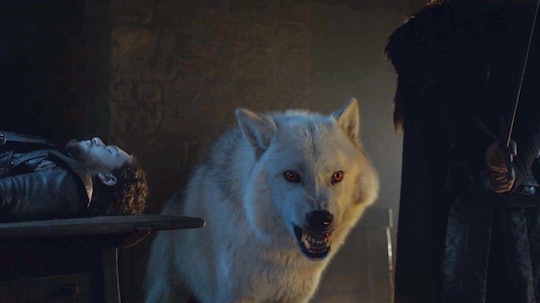 Has Anyone Seen Ghost On 'Game Of Thrones'?

Of the six direwolves Ned gave his children, only two remain living. While fans continue to question whether or not that was really Nymeria in the latest episode, others can't help but wonder where is Ghost on Game of Thrones? The albino runt of the litter hasn't been seen since early on in Season 6 and though he's definitely alive it's worrisome that he's been missing for so long. However, there's a reasonable explanation for his absence.

GOT writer and producer Bryan Cogman tweeted out after Sunday's episode that there was in fact a Jon and Ghost scene but it was cut from the episode, most likely due to lack of time. The episode, "Stormborn," was pretty jam packed with Sam attempting to heal Jorah of Dragonscale, Jon deciding to head to Dragonstone and appointing Sansa Queen of the North, and the ultimate sea battle between the Greyjoys. Plus, Jon had to choke out Little Finger before he left and really, wasn't that scene a bit more necessary than seeing Ghost?

Still, that didn't make the absence of Ghost any better. He's been gone for too long and after possibly seeing Nymeria (was it her or not?!), Ghost's absence was even more prominent. Also, wouldn't Jon want to say bye to his wolf before he left? It just seems out of character that he didn't.

Hopefully, Ghost will make a reappearance at some point this season. With Jon gone, Ghost may step in as Sansa's protector, especially against Little Finger's constant advances. It'd be great to see Ghost take out Little Finger once and for all and Jon would certainly approve.

With only two wolves left, it'd be nice to see more of them but getting the direwolves on screen is, unfortunately, not cheap. Ghost missed out on the Battle of the Bastards because the cost to bring him to life was too much and the director decided it'd be better to have Wun Wun there than Ghost. It's most likely this kind of budgetary choice that has been made over and over throughout the seasons, and Ghost always seems to get the short end of the stick.

However, with Game of Thrones drawing to a close Ghost will have to show up at some point. The show can't end without a final appearance by Ghost, but fans also don't want to have to wait until the series finale to see Ghost again. Hopefully, it won't come to that.