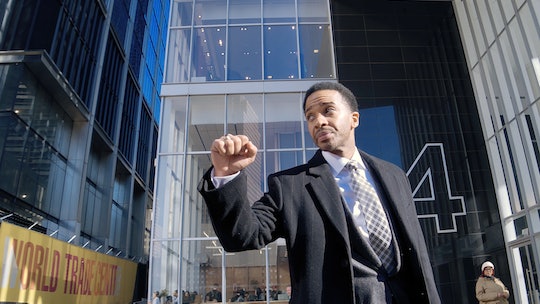 Netflix's 'High Flying Bird' Is Set In This Fast-Paced City

Netflix’s new film, High Flying Bird, premieres on Feb. 8, and from the looks of it, the movie should be a treat for cinema buffs. The movie tells the riveting story of a sports agent named Ray Burke, who finds himself between the NBA and its players amidst a pro basketball lockout. The film has a unique feel, but features a familiar metropolitan city. So, exactly where is High Flying Bird set?

High Flying Bird is set in Manhattan, New York, and in it’s trailer, you can see the city’s recognizable skylines and neighborhoods. In a few scenes feature some of New York City’s most iconic landmarks, including Grand Central Station, the World Trade Center, and Times Square. The movie is about the fast-paced, cutthroat world of sports, and I doubt any setting could compliment that vibe more than New York City.

High Flying Bird comes from Academy award-winning director, Steven Soderbergh (Traffic) and was written by Academy Award winner Tarell Alvin McCraney (Moonlight). The film stars André Holland (Castle Rock, Moonlight) as Ray, an NBA agent who has 72 hours to pull off a daring plan that could not only save his career, but also change the game forever. In the film, Ray figures out how to outmaneuver all the power-players in the picture, and uncovers a loophole that raises questions on who owns the game – and who really should.

In an interview with The Hollywood Reporter, Soderbergh revealed that the idea for the movie came from Holland — who he worked with on Season 1 of The Knick — and the two worked on an concept for the story, eventually bringing McCraney on board to visualize the film and write the screenplay. “I think it took him (McCraney) two years to write,” said Soderbergh. “When it came in, it was done, he had a very, very clear idea of how it should be done. We did an afternoon’s worth of polishing in New York just before we started shooting. It’s almost exactly what he wrote.”

Once the details were ironed out, Soderbergh said that he shot the film in a very short timeframe, and rather than lugging large cameras and dollies around the city, he used an IPhone camera for filming.

“It was shot in February and March of 2018, in three weeks…It’s a very small crew and the gear that’s available to enhance this already pretty extraordinary capture-device made it even better,” the director told THR. “I was able to do things because of the ease of shooting something, you can basically shoot anything you can think of, you can put the lens anywhere you want. If I were in a more traditional mode, there were things that I wouldn’t have been able to execute as well as I’d wanted, because of the size of the equipment and people necessary to move it around.”

There’s no question that moving around New York City is no easy feat, and sometimes you have to move like a basketball player to get where you want to go. It’s the perfect setting for a movie like High Flying Bird, where all of that high stakes drama is just part of the game.