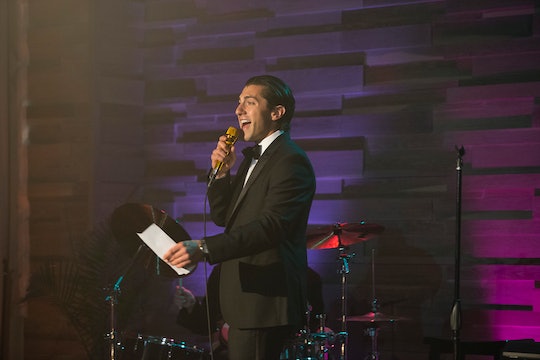 Jason Gets A Homey Surprise On 'The Bachelorette'

On The Bachelorette, it's at first hard to distinguish who will go far in the competition and who Becca just doesn't see a connection with. I have to say, Jason is one guy I definitely misjudged at first. Where is Jason from The Bachelorette from? His friends crash his date with Becca — but I'm really glad they got a chance to go on this date in the first place.

At first, I was afraid Jason would just be remembered because Becca forgot his name. Yes, during the pampering group date, Becca forgot Jason's name and he was a great sport about it. He said she did it "to the right guy," and that he doesn't stress out about stuff like that. I bet that would've really annoyed Chris, who threw a tantrum during the last episode because he didn't get a group date rose. But now, Jason seems like a really chill contestant, and he's probably lasted this long because of it.

Up until now, Jason has been one of the few remaining contestants that hasn't had a one-on-one date. This will change during Monday night's episode, where he finally gets alone time with Becca. During an ABC promo of Jason's one-on-one, while it's finally his time to shine his friends decide to crash the party. But don't worry! Becca planned it all to go down to surprise him. "Becca Kufrin takes Jason on a one-on-one date where she arranges to have some of his best friends come out to meet them," the promo says. "As they get to know each other better, Becca and Jason's connection seems to be growing."

Jason and Becca definitely have chemistry from the promo alone, and Becca says she can imagine a "forever" with him. According to his ABC biography, Jason is a senior corporate banker from Buffalo, New York. "When Jason's not rooting for his hometown Buffalo Bills, he's belting out tunes from his favorite Disney movies," the bio states. "He's hoping to sing his way into the Bachelorette's heart." On Jason's LinkedIn, though, his current city is listed as Seattle — so he's living across the country from his hometown.

Jason's Instagram bio says the same thing: he's currently in Seattle, so while he was a lot closer to The Bachelorette mansion, he's a lot farther from home. I don't know whether these friends are from Buffalo or Seattle, but Jason was thrilled to see them regardless. At the time of the date it looks like Becca and her guys are in Richmond, Virginia. So perhaps these buddies of Jason's were from that area. Or perhaps ABC actually was able to fly all three of them out their to surprise Jason on this date. In which case, even if the date was a total dud than it still ended pretty well. I like Jason though, so I really hope that he makes it at least for the next couple of weeks. He hasn't caught up to clear frontrunners Garrett and Blake yet in terms of popularity, but there's still time.

I hope he lasts long in the competition but if he doesn't win, he's a great contender for the next Bachelor. He clearly cares about Becca yet hasn't become too insecure or possessive in the way that candidates like Jean Blanc and Chris have in the past couple of weeks (to their very great detriment). I can definitely see Jason being a great lead of the show. And if not then I'm sure there's a ticket to Paradise with his name on it. For now though, I'm excited to see their one-on-one date and how his and Becca's relationship develops.