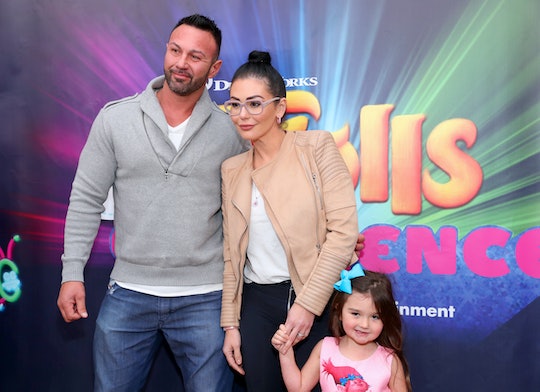 Fans have been following Jenni ‘JWoww’ Farley and Roger Mathews since they started dating on the first season of Jersey Shore. Their relationship has seen its share of ups and downs, but the reality stars recently confirmed they’ve split for good. After seeing her deal with divorce on the latest season of Jersey Shore: Family Vacation, viewers might be wondering where Jenni’s ex-husband Roger is now.

Well, he’s still pretty active on social media, so you can pop on over to his Instagram page to see what he’s been up to. From the looks of it, Jenni is letting him spend time with their two children — Meilani, 5, and Greyson, 3 — because most of his posts are pictures of outings with the kids. Both Jenni and Roger seem to be keeping things cordial for the sake of the kids. On Mother’s Day, Roger posted a picture of Jenni with a loving tribute, and in a Memorial Day post, he clapped back at people criticizing their parenting.

“There seems to be an overflow of negative comments both toward me and toward Jenni on many of my posts still," he wrote. "I’m a big boy and a proud supporter of free speech, I can take it. Jenni also has tough skin and can take it however the comments as to who the better parent is, or who spends more time our children are unnecessary. I accept my responsibility in the divide I caused in the eyes of the public but I’ll always post about my children and if we can move past the negativity certainly it wouldn’t be too much to ask for everyone else too. We both love our children emphatically and always will."

The couple’s divorce went public in September of 2018, when Roger took to Instagram to post a video explaining why Jenni left him. “My wife filed for divorce, it’s true,” he said in one video. “I don’t blame her. There’s no cheating or any dumb s— or any juicy details. She just grew tired of the repetitive pattern that we fell into, and not a good one.”

A few months later, in December, Roger posted a series of Instagram videos from the back of a police car, alleging Jenni called the cops on him and had him arrested. Soon after, Jenni’s rep responded with a statement via IG revealing she filed a temporary restraining order against Roger, but hoped to keep things private “in an effort to protect herself and her children.”

Jenni wasn’t thrilled Roger made this announcement to the world, and in a sneak peek for Season 3 of Jersey Shore: Family Vacation, she tells Nicole “Snooki” Polizzi she wasn’t ready to go public with the divorce at that time. “I thought silence was the greater good,” she says. “As bad as our relationship got, I stayed f–ing quiet, because that’s what you’re supposed to do. So to me, the ultimate betrayal is the fact that he went public.”

She goes on to say that she never had Roger arrested, and felt the videos he posted were a “low blow.” Snooki explains that Jenni was always nice to Roger, and even let him stay in the house for the sake of the kids after filing for divorce. Jenni tells Snooki that she has no bad feelings for her ex, and just wants things to remain peaceful. “I just want this to calm down because I’m in the public eye, and I don’t want this to get out of control,” she says in the clip. “At the end of the day, he’s still the father of my kids. Gotta keep it together.

It seems like Jenni and Roger are taking the high road post-divorce, and that’s a testament to how much they love their kids. I’m sure fans will get to see more of Jenni’s side of the story as the new season kicks into gear.