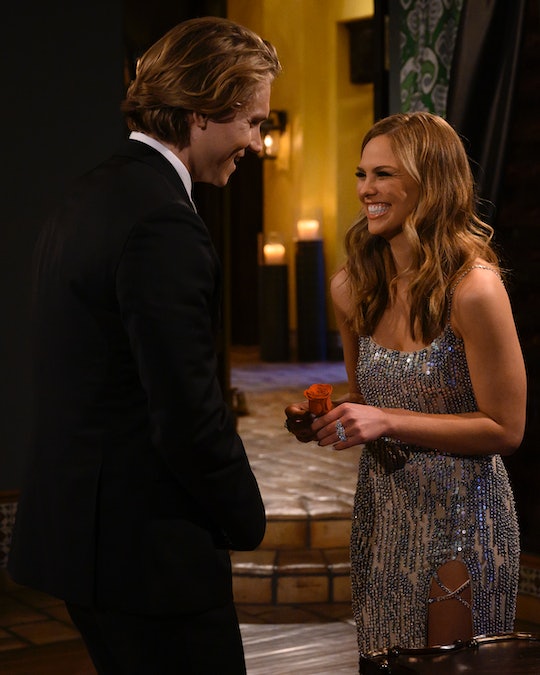 There are some bold personalities on this season of The Bachelorette — it makes for good TV. Among the quirky dudes vying for Hannah's heart there's one guy I can't help but remember because he goes by three names. But, where is John Paul Jones now? The Bachelorette contestant does have an actual job — outside of being "John Paul Jones."

As of now, John Paul Jones is riding the Bachelorette wave. It's not entirely clear how he's spending his free time. And because he hasn't yet been kicked off Hannah's season, he's probably locked into complete ambiguity until he's no longer one of her men. A deleted scene from the most recent episode shows there's definitely more to JPJ than he originally let on. He let Hannah cut a lock of his hair to signify sacrifice and its connection to love. She obviously swooned, and he made it through another week.

As for what he's doing, he hasn't taken to social media all that much, but when he does, he makes light of the situation. "Finally get to take it easy after grinding it out for that final rose," he captioned in the photo below. He obviously knows how to poke fun. His Instagram page has a few pictures that reference his time on the show, but nothing really explains what he's doing otherwise. There aren't a ton of pictures to sort through, to be honest. The ones that are posted suggest he likes to spend time fishing or on a boat, or possibly with friends and family. His LinkedIn page states he's a Financial Analyst in the Washington D.C. area, so maybe he's back at the day job. In 2015, he volunteered for a Mission Trip to Kingston, Jamaica with The Catholic university of America, so he could also be planning another trip abroad — with or without Hannah.

Another side note about JPJ, is that he's acted. Now that he's had the role of a lifetime on ABC — as John Paul Jones — I can totally see him in the next Quentin Tarentino film. I can honestly say, Season 15 of the female-fronted franchise is a doozy.

Contestants have already been given the boot for secrets and lies (no spoilers in case you haven't caught up), and the ones still there are competitive AF. Whether it's Luke P. spiraling when he's dethroned as King of the Jungle, or Cam's pity rose situation taking over the night, no one is safe from elimination. So far, JPJ has played it pretty cool and mellow, but I also don't see a ton of chemistry between him and Hannah. If producers have nudged her to keep him another week for ratings I have to admit, I'm still here for it.

I'm sorry I can't give you every juicy details about what John Paul Jones has been up to these days since filming The Bachelorette. By the looks of anything he's posted online, he doesn't want anyone to know just yet. He may be gearing up for Season 6 of Bachelor in Paradise, or enjoying the simpler, camera-free life back home in Maryland with his family and friends. If I had a say, I'd pluck JPJ from Hannah's crew and put him directly in the middle of Paradise drama.