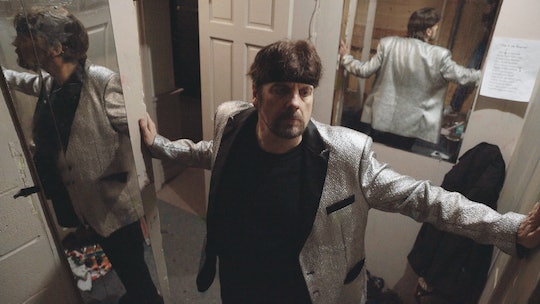 The Amazing Jonathan May Have Pulled His Best Trick Yet

The Amazing Johnathan Documentary, in select theaters and on Hulu Friday, tells the story of magician, John Szeles, who became known in his act as "The Amazing Johnathan." What begins as the story of a terminally ill man who made a surprising comeback, may ultimately end with a bombshell that threatens filmmaker Ben Berman's project altogether. Six years after Szeles's terminal diagnosis that didn't take, I can't help but wonder where Johnathan from The Amazing Jonathan is now.

To tell you where Szeles is now, it's important to know what nearly derailed his career, and life, six years ago. In 2013, the longtime Las Vegas headliner was diagnosed with cardiomyopathy, a degenerative condition in the heart muscle that can be fatal. With that diagnosis, he was given only a year to live. It's no spoiler to the documentary to say, at 60 years young, "The Amazing Johnathan" is still very much alive. One look at his active Instagram page shows he's promoting the documentary, sharing snippets of old performances, and showing the world his greatest trick yet: beating death.

Heart diagnosis aside, Szeles's magic is shown in the documentary. All of this may seem like enough to detail Szeles's journey, but what happens in The Amazing Johnathan becomes something of a meta experience. To the filmmaker's surprise, Szeles had also been in talks with someone else about documenting his story with another title, Alway Amazing on You Tube. If you think the illusionist's story is finished there, think again.

In an interview with Esquire about why he wanted to make a film about The Amazing Johnathan, Berman said, "They mentioned he was unfortunately dying, and he was doing drugs, and a couple of things were just like, 'Oh that could maybe make for an interesting film.' And at that point, I was thinking it would probably be a short film, just this very quiet, beautiful funny, vérité, 15-20-minute doc on an older magician confronting mortality with emotion and humor." He added he "started imagining it as a larger movie once there was a significant turn in the narrative." That narrative was, of course, the alternate YouTube documentary to compete with.

Three years after the diagnosis, the magician returned to the stage. The Amazing Johnathan captures his attempted comeback through four years of filmed footage, according to a Tweet from Szeles, while battling his drug addiction and cardiomyopathy symptoms (which had him frail and unable to walk at one point). Berman's film, which began as a profile to showcase Szeles's faux gore, shock-and-awe style, transforms into a portrait of the filmmaker's unraveling when news of the dueling documentary came about. It almost makes you wonder if The Amazing Johnathan pulled his greatest trick yet, and the film crew wasn't in on the joke.

You'll have to watch the commentary to see how it all plays out, but illusion isn't the only thing Szeles had success in. He tried his hand at a members-only indoor drive-in movie theater called Amazing Underground, and is the longest running, most successful solo comic magician in U.S history. That's not nothing. He's even hosted an online talk show called Burn Unit in the time since his diagnosis, so the man hasn't let illness slow him down. Back in July 2017, Szeles explained why he never gave up on his passion. "The thing is, they gave me a year and a half and that was almost three years ago, and I get tired of sitting and waiting for it to happen," he said. "So I just thought, I’m going to go back to work. … If I die, I die on stage, rather than in my bed."

Terminal illness or not, Szeles is using his time to spread the word about his documentaries on social media. So, even if he doesn't manage to cheat death in the end, his legacy will certainly live on.