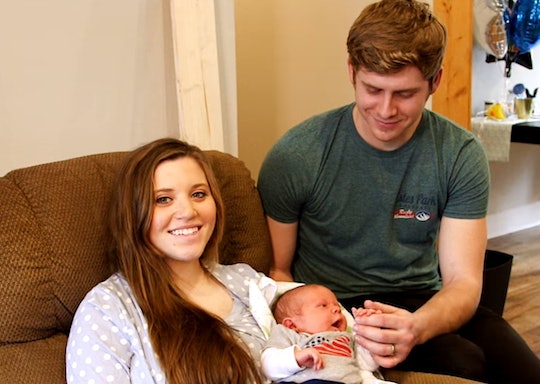 Joy-Anna Duggar and Austin Forsyth just celebrated their 1-year anniversary on May 26, according to the family's Facebook page. And in that year, the young couple became the parents of a bouncing baby boy (really bouncing, he weighed 10 pounds!). Baby Gideon was born in late February and with so many changes so fast, you might find yourself wondering where exactly Joy-Anna Duggar is raising her son now?

It appears she’s staying close to her beloved family. (Let’s hear it for babysitting help!) The Duggar family home, in Tonitown, Arkansas has been the center of family life for their children for a long time, according to In Touch Weekly. So, it makes sense that once they’ve married and moved out of the house they might want to stay close by. Luckily for Joy-Anna, she fell in love with an Arkansas boy. Forsyth hails from Combs, Arkansas, where his parents own a Christian camp, according to Us Weekly. A quick Google map search will tell you that the distance between the two cities is about 45 miles, so it would conceivably be pretty simple for the couple to stay close to both sets of parents.

The Duggar family announced in a blog post on May 31, 2017 that was indeed the plan. “When the couple returns home, they will build a house near both families, and it might not be too long before they enter parenthood.” No details have ever been released on the location of the home and, with a family as protective as the Duggars are of one another, it’s no doubt a carefully kept secret.

A small hubbub arose when, just a few days after giving birth to their son Gideon, details emerged about the home the Forsyths were renovating. In Touch Weekly reported on the Season 7 premiere of Counting On, during which Joy-Anna and Austin spoke out about the home. It was purchased for $69,250, according to a county document obtained by Radar Online, and has three bedrooms and one bathroom. Joy-Anna reportedly commented that is was “nasty” and “really moldy,” which isn’t exactly the kind of environment anyone wants to take a newborn into, of course. But Austin knows a thing or two about home reno; according to Hollywood Life, his father told him that he needed to flip five homes before he could enter into courtship with Joy-Anna. There’s little doubt that he protected his pregnant wife and child while any dangerous work was taking place.

Though not quite finished, the home is coming along nicely, as evidenced by this clip from a recent episode:

It’s also unclear what Austin is doing to support his young family right now, but with a skillset for and track record of flipping homes he may be making a pretty nice living.

While their home has been under construction the Forsyths were living in an RV, according to In Touch Weekly. Part of this season of Counting On has been watching the newlyweds adjust not only to marriage, but to impending parenthood and living in close quarters. I applaud them, I could not do it!

Like several other member of their family, Joy-Anna and Austin appear to enjoy traveling a bit. They went to Geneva, Switzerland for their honeymoon, according to E! News. Then they quickly hopped to Israel where they spent their one-month anniversary, according to the Duggar family blog. But having their permanent home established so close to the rest of the family has to be a relief to Michelle and Jim-Bob. The family’s despair when Jinger moved with her husband to Laredo, Texas was palpable, according to People. Austin and Joy-Anna also told People that they want to have as many children “as the Lord thinks we can handle”, which could lead them to become one of the larger offshoots of the Duggar family.

With plans like that, some of the additional help of friends and family nearby will likely be more than welcome.