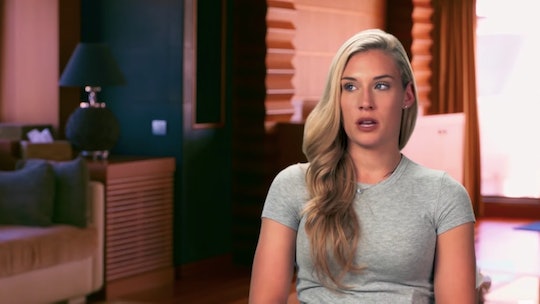 June Made Friends With Some Dolphins After 'Below Deck Med'

June Foster came through in a pinch on Season 4 of Below Deck Mediterranean, but her successful run as a stew on the Sirocco wasn't enough to land her a permanent position. Captain Sandy chose to let her go when Anastasia Surmava stepped aside for the new chef, because there just wasn't room for a fourth stew. But where is June from Below Deck Med now?

June was emotional about exiting the yacht, but it doesn't look like she was wallowing for long. She shared her newest career opportunity on her Instagram stories and it was subsequently reported on by Bravo. On a shot of a stunning ocean vista, she wrote that she was on a 1930s sailboat off the coast of Ischia working as an assistant research volunteer. It was a four week job that involved listening to whales and dolphins through hydrophones and recording the data. "I have already learned so much and thank God for my deck experience," June concluded.

There were no sour grapes about how things had turned out with the show, either. June wrote that she had "quickly moved on after Below Deck" and she was "so happy where I am now." She added, "All [is] forgiven and life moves on."

But that isn't all June is up to. Her Instagram bio lists her many various careers: on top of her yacht work, June is a yoga instructor involved in several charity endeavors relating to helping kids and conservation. She's also an author, with one published novel to her name. The Girl and the Golden Leaf is about teenage twins Tia and Finn, who find themselves in one dark situation after another. The novel's summary on Amazon says that they travel from Fayetteville to Río Futaleufú to Buenos Aires. Tia relies on her faith to "survive the darkest pits of humanity."

Travel seems to be June's passion, at least based on her Instagram. When she's not posting Below Deck Med promo or sharing a sponsored pic, she's got beach photos to spare. She also speaks about how positive the process of traveling alone has been for her. She's spent the last three years traveling solo, and urged her followers to embrace the possibilities it offered. "If your friend can't go, then you go!" she wrote. "Traveling along is so liberating and in the end your [sic] not even alone, you'll meet so many wonderful people along the way."

June appears to be following her bliss and having a good time doing it. So even though her exit from Below Deck Med was tense in the moment, it seems to have been for the best. Her cast mates have had nothing but praise for June in the aftermath too, with Captain Sandy taking to Twitter to thank June for her work and assure her that she has a bright future ahead of her. Anastasia expressed gratitude for June on Twitter, too.

It's not clear what June will be getting up to when her four week excursion comes to an end, but it looks like she's never short on opportunities.