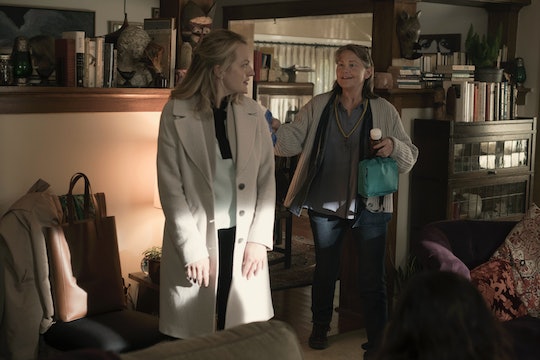 June's Backstory On 'The Handmaid's Tale' Is Missing One Significant Figure

The Handmaid's Tale returned to Hulu for a second season this spring, and despite the fact that Season 1 told the complete story of Margaret Atwood's novel, the show's writers aren't having any trouble mining the source material for more storylines. The first two episodes of Season 2 were every bit as tense and horrifying as Season 1 and we're still being introduced to new characters. In episode 3, we'll meet June's mom in flashbacks, but where is June's dad on The Handmaid's Tale? It's not clear whether he'll play a part in the Hulu adaptation.

June's parents aren't named in the novel (neither is June, explicitly), but we do learn that her mother is a politically active second-wave feminist who tried to instill her own values in her daughter. It's hinted at in the book that June's mother ended up in the Colonies, the radioactive work camp where women who don't adhere to Gilead's strict social order are sent.

In a flashback, we learn that June's mother once brought her to an anti-pornography protest and urged her to burn a pornographic magazine. June recalls not understanding what people were protesting and, in general, she didn't understand her mother's feminist fervor. Before the erection of Gilead, June believed that the rights her mother was fighting for had already been won. She didn't see how her mother's causes were still relevant. We also learn in the books that June's mother had a one-night stand with June's father for the express purpose of getting pregnant. While he sent her occasional Christmas and birthday cards, he wasn't a part of June's life growing up and she was essentially raised by a single mother.

This past January, it was announced that Cherry Jones was cast to play June's mother in the Hulu adaptation. They named the character Holly and, for now, IMDB indicates that she will only appear in one episode. We can surmise from the production stills that have been made available that Holly will appear in flashback scenes, but there's no indication of June's father making an appearance on the show. He isn't listed as a character on IMDB, and he doesn't seem to appear in the episode alongside Jones. It's possible June's dad will factor into the story in a later episode, likely also in a flashback, fleshing out her origin story. But for now, there's no indication from production that it'll happen.

Meanwhile, Elisabeth Moss, who serves as an executive producer on the series, admitted that Cherry Jones was her "fantasy choice" to play her mom. She told The Hollywood Reporter:

She's a terrific literary character who’s now going to come to life for the first time, and so it was important to me who that was. I was obsessed with it for weeks and bothering everybody about it — way before anybody cared to talk about it...We sent [Jones] the script, she wrote a lovely email back and she said yes almost immediately.

Showrunner Bruce Miller also pointed out that the problematic oppression baked into second-wave feminism was a huge issue when the novel was first published in 1985. Of course, we're still having a version of the same conversation today, which is why the Hulu adaptation is so prescient. "June's mother is a big character in the book and representative of an interesting kind of feminism that was seemingly more of that time," Miller told THR during Season 1. "June's memories of her mother and her activism are very vibrant in the book."

It remains to be seen whether her father will be similarly fleshed out for the series. Fans will just have to wait and find out.