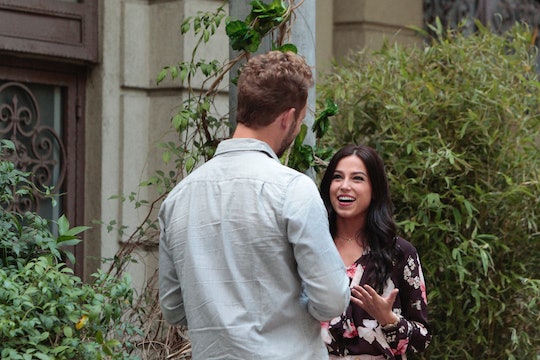 Kristina's Backstory Is Filled With Tragedy

After an explosive and game-changing sixth episode, the stakes are higher than ever on Nick Viall's season of The Bachelor. A pair of disastrous dates (one group date and another two-on-one) left Nick in literal tears and questioning everything about his chances of finding love on TV. Honestly, it was a little bit shocking that such a dark and foreboding episode took place in gorgeous St. Thomas. But the one shining light was Nick's one-on-one with a certain dental hygienist. Kristina discussed where she is from on The Bachelor Week 6 and it proved to be an unexpectedly heart-wrenching moment for all viewers.

Amidst a season of larger-than-life personalities like Corinne Olympios, Jasmine Goode, and Alexis Waters, Kristina has flown under the radar. The 24-year-old Kentuckian has had plenty of telling-it-like-it-is moments in the comfort of the group of women, but around Nick, she's been much more quiet. Even Nick, at the start of their one-on-one date, mentioned that Kristina had been one of the more shy women, making him more intrigued to get to know her.

Kristina sure did open up to Nick during Week 6. A discussion about whether she had any siblings led to an incredibly raw and real moment in which she filled Nick in on her backstory. Though she currently lives in Lexington, she explained to the Bachelor star that she was actually born in a "very small town" in Russia, where she lived in poverty until she was five or six. That's where her story turns tragic — apparently, she was shipped off to an orphanage after Kristina disobeyed her mother's rule of not eating anything in the house one day. Kristina spent seven or eight years in an orphanage before she was adopted by an American family at the age of 12.

Though the story would appear to have a happy ending, Kristina explained that it had been hard for her to leave the orphanage (where she'd bonded with the other children and grown up with them for years) and her biological sister behind. Ultimately, she was happy that she'd decided to immigrate to America, after an adult at the orphanage told 12-year-old Kristina, "If you stay in Russia, your life will be black and white, but if you go to America, it will be in color." Wise words that Nick clearly understood the significance of when he echoed them back to Kristina at the end of their date.

Though Kristina's tragic tale was hard to hear, it represented one of the realest and most emotionally raw moments I've ever seen on any season of The Bachelor. Their conversation even prompted a Reddit petition for Kristina to be the next Bachelorette, if she doesn't win the season. It also marked an important turning point in her relationship with Nick, and I wouldn't be surprised if Kristina could now be counted among the frontrunners in Nick's eyes.