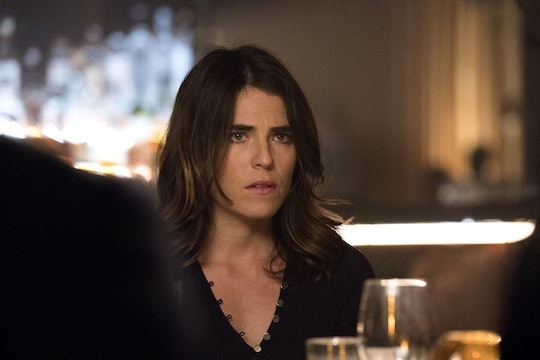 Although Annalise Keating is technically the "star" of How To Get Away With Murder, the show's first three seasons really set up Wes — a first-year law student so non-threatening that he earned the nickname "Puppy Dog" — as the protagonist to root for. However: Wes died, so we need a new member of the Keating Five to focus on. Enter: Laurel Castillo, girlfriend of the deceased and mother of Wes' unborn child. But a flash-forward in the Season 4 premiere has fans wondering: where is Laurel's baby on How To Get Away With Murder?

At first, viewers are led to believe that Laurel chose to have an abortion after Wes' death, which is a reasonable outcome: she's in the middle of law school, her boyfriend just died, and she's spent most of her graduate life evading various felonies at the hands of her mentor/professor/employer. It's a lot for one woman with a complicated history of her own to handle. We learn the news when Laurel breaks it to her dad, a powerful, manipulative businessman who's always lurking in the shadows of his daughter's life, controlling things behind the scenes. But it quickly becomes clear that Laurel is playing him right back. Fans know he's the figure behind Wes' murder and it seems as though Laurel knows it too — or at leasts suspects as much. But she doesn't let her dad know she's onto him, instead, playing out a manipulative game of her own.

I don't know what Laurel is up to, but for whatever reason, she doesn't tell her dad that she knows he's responsible for Wes' murder. In fact, she leads him to believe that she's terminated her pregnancy. It's likely that she's concerned for the baby's safety, given that her dad had no qualms murdering her boyfriend.

At a fancy dinner orchestrated by Annalise, the disgraced law professor quietly tells the Keating Five (plus Bonnie, minus Wes) that they're all fired by presenting them with glowing recommendation letters. She feels responsible for Wes' death (which to an extent: duh, she is), and she doesn't want to destroy anyone else's life before they even graduate. Although as Michaela points out: their GPAs are already unsalvageable. (Sidestepping murder charges for months apparently doesn't leave a ton of time for studying.) Right before Annalise drops the bombshell, Laurel reveals that she's decided to keep the baby, and gives us the all-important detail that her due date is in five months.

The final scene in the season premiere shows us a flash-forward three months into the future, which would put Laurel at about seven months pregnant. Except she's in an all-white, institutional-looking hospital room, coming out of what appears to be a heavily medicated fog, with no baby bump. She screams, "Where's my baby?" while Frank tries to calm her down (by ignoring the question). Annalise's new therapist, played by Jimmy Smits, is also in the room, prompting some to wonder whether Laurel has had some sort of mental break and is in a psych ward.

So what are the possibilities? One is that Laurel went into labor early after some sort of trauma and that the baby was born while she was unconscious. Another is that Laurel really did have an abortion, but later suffers a psychiatric episode that causes her to believe she's still pregnant. It's also possible she had a miscarriage at some point between the dinner scene and the flash-forward, but still suffers from some sort of psychiatric delusion. Finally, it's possible that she knowingly had the baby, but it's disappeared from the hospital (ahem, Annalise).

Presumably, she can't hide her pregnancy from her dad forever. I think it's conceivable (by HTGAWM standards, anyway) that Annalise somehow absconds with the premature baby to protect it from whatever Wes-related animus Laurel's dad suffers. Given the way the missing baby storyline gets set up in the premiere, it's likely #WhatHappenedToTheBaby will be the question of the season. Fans' best bet is to buckle in for some twisty turns on the way to an answer.