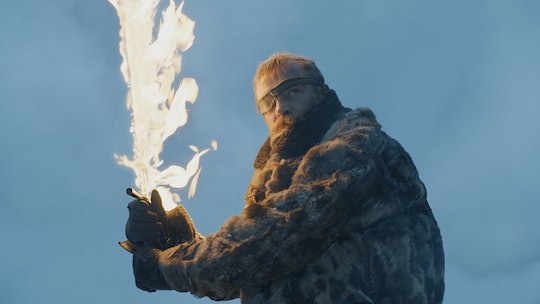 Lightbringer Could Make An Appearance On 'Game Of Thrones'

It's difficult to keep up with all the details on Game of Thrones, including who's related to who, what everyone's house "words" are, and who's special piece of weaponry does what. Sure, there's Littlefinger's dagger which will probably prove to be very important later on. But there's also one very special sword we should probably be on the lookout for in the episodes to come: Lightbringer. So where exactly is Lightbringer on Game of Thrones? This sword is very important to a particular prophecy.

Lightbringer is said to be a sword of fire that belonged to the original Azor Ahai when he defeated the long night. This is relevant for a couple of reasons, not least of which being that the preview for Episode 6 showed Beric Dondarrion waving around a flaming sword. It's not the first time he's been seen with his fiery sword either. It is the sword he was using when he fought The Hound in some sort of weird trial by combat back in Season 3, when he was charged by Arya with killing Mycah, the butcher's boy. The Hound may be terrified of fire but he didn't let that stop him. He killed Beric, but Beric was resurrected by Thoros of Myr for the sixth time. The presence of this flaming sword does make Beric an outside candidate for being Azor Ahai reborn. After all, where did he get it?

There will come a day after a long summer when the stars bleed and the cold breath of darkness falls heavy on the world. In this dread hour a warrior shall draw from the fire a burning sword. And that sword shall be Lightbringer, the Red Sword of Heroes, and he who clasps it shall be Azor Ahai come again, and the darkness shall flee before him.

In the books, Azor Ahai took 100 days and three previous failed attempts to create this sword, finally finishing it by plunging it into the heart of his beloved wife Nissa Nissa. Some think we're meant to take this story literally, others think it could be more metaphorical. No history of Beric's flaming sword has been addressed yet, probably because everyone has been too preoccupied with dragons, the undead, and trying to sort out everyone's family tree.

So if Beric has Lightbringer, does that mean he's really Azor Ahai rather than Jon Snow or Dany? He and his brotherhood seem to believe they are on some sort of divine quest beyond the Wall. Perhaps the answer has been staring us in the face the whole time.