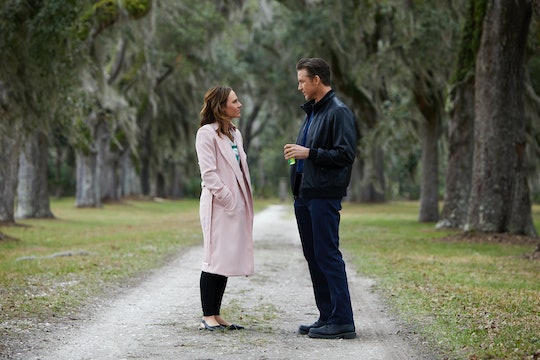 Spring is in the air, which means it’s the perfect time to settle in and watch Hallmark’s new romance, Love Takes Flight. The film — which premieres on Saturday, Apr. 27 — tells the story of a single mom and a pilot that form a connection, and give themselves a chance at love. With all the scenic landscapes shown in the movie, viewers may be wondering where Love Takes Flight is set.

The sprawling greens and flowing trees may have been a clear giveaway that Love Takes Flight is set in the charming city of Savannah, Georgia. Savannah is known for its historic architecture, giant willow and oak trees, coastal parks, and its old country charm. The city is the perfect backdrop for a budding romance, so it’s no surprise Hallmark picked it as the setting for their new film.

Love Takes Flight tells the story of Dr. Lizzie Beauman (Nikki DeLoach), an OBGYN who traded in her hectic medical schedule to take on an administrative position as the COO of St. Carmen’s Hospital in Savannah. Lizzie took on the new role in hopes of being able to spend more time with her diabetic five-year-old daughter, Quinn (Skylar Olivia Flanagan), who she has been raising as a single parent ever since her divorce.

Knowing how hard it is to take care of a sick child, Lizzie is dedicated on building a new wing in the hospital that could help families with chronically ill children. When looking for a EMS pilot who would be able to bring in donor organs on the fly, Lizzie meets ex-military pilot Charley Allen (Jeff Hephner). Because he’s planning on leaving Savannah for good, Charley doesn’t seem like he’s ready to commit to the position full time, so Lizzie sets him up on a temporary two-week stint.

Lizzie soon realizes that Charley is the son of her daughter’s new friend Walter, (Tom Thon). Through work at the hospital and social get-togethers with Quinn and Walter, Lizzie and Charley end up spending a lot of time together, and they talk a lot about Walter’s retreat since his wife’s death years prior. Lizzie discovers that her daughter is on a mission to help Walter heal from his loss, and upon realizing how kind this gesture is, she continues to let the two families socialize.

But as the two families grow closer, Lizzie and Charley begin developing feelings for each other. This becomes a difficult situation for both of them, because Lizzie is adamant about not mixing her professional life with her personal, and she knows that Charley will be leaving Savannah soon. Both are faced with a difficult decision, and they must choose whether or not they want to allow their feelings for each other to soar.

So, know that you know where Love Takes Flight is set and what the movie is about, you know why it makes the perfect spring weekend watch. The film airs on Saturday, Apr. 27 at 9 p.m. ET on The Hallmark Channel.