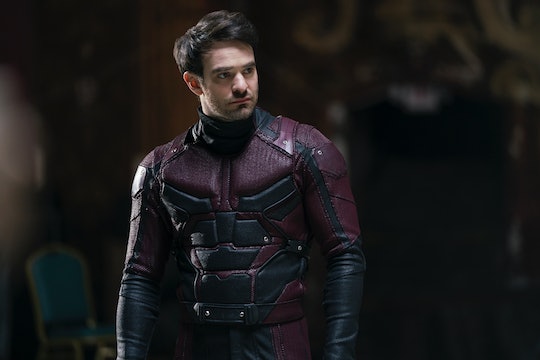 Matt's Fate On 'The Defenders' Came With A Shocking Twist

Matt Murdock, Jessica Jones, Luke Cage, and Danny Rand finally teamed up in The Defenders and a lot went down in those eight episodes. Though the group of four were able to defeat the Hand (supposedly), they ended up losing one of their own in the final battle — or at least, they believe they did. Matt stayed behind in the building that later exploded to be with Elektra, but at the end of the episode it was revealed that Matt is actually still alive. So where is Matt at the end of The Defenders? It looks like he's in a nunnery.

At the end of the season finale, viewers found Matt in bed with a nun sitting on the edge of the mattress watching him. He's obviously very wounded, but his hand twitched and it's clear he is still alive. Based on the nun, the cross on the wall, and the rosary beads on the night table, it definitely looks like Matt was brought to a nunnery or a very Catholic hospital. Either way, why was Matt brought there? Fans got their first clue when the nun on the bed told someone to "get Maggie." However, if you didn't read the comics, you probably don't know who Maggie is.

In the comics, Matt's mother was named Maggie and more importantly, she was a nun known as Sister Maggie. This explains why Matt was found in a nunnery. In the comics, Maggie actually did save Matt a few times so it makes sense that she would be the one to save him in the show. But how did Maggie know that her son was in danger and that she needed to save him? Additionally, did she only save Matt or did she also save Elektra?

Unfortunately, these are questions that won't be answered until Daredevil Season 3. For now though, fans can't wait to meet Maggie and see what her interactions with Matt are like.

The show hasn't really gone into the mystery of Matt's mother yet. Thus far, it's only been made clear that Matt grew up with his father, Jack, but not what happened to his mother or why she wasn't a part of his life growing up. No doubt, Matt won't exactly be all that happy to be reunited with his mother, and it's possible she won't even tell him who she really is. However, because of Matt's senses, if she does lie about who she is, he'll be able to know. Regardless of what Matt's relationship with his mother becomes, fans are just thankful she was able to save him.