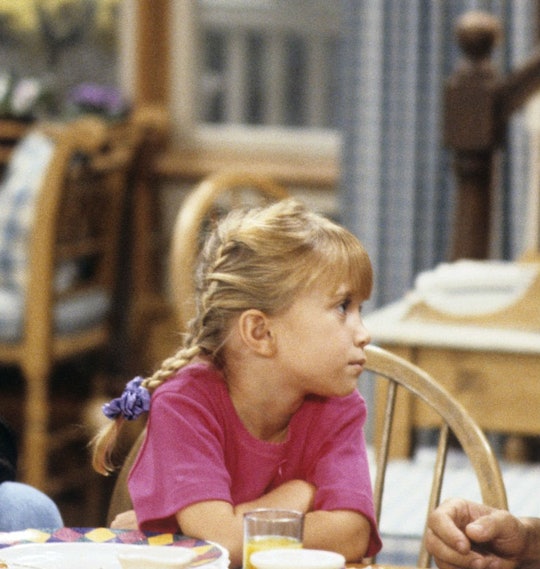 Where Is Michelle Tanner, According To 'Fuller House'?

Whatever happened to predictability? The milk man, the paper boy, and Michelle Tanner. Fuller House, the long-awaited Netflix revival Full House, premiered on Feb. 26, warming the hearts of '90s kids around the world. But fans of the show were quick to notice one character's absence from the Tanner kitchen table. And although it's great to see the entire gang back together, many fans wondered where is Michelle Tanner (played by Mary-Kate and Ashley Olson) and how will Fuller House explain the main characters disappearance.

When Full House ended in 1995, fans saw a then 9-year-old Michelle fall off a horse, get a concussion, forget her entire family, but then remember who they are just in time to see DJ off to prom. It was the kind of cheese that would keep a lactose intolerant person in bed for days. (But hey, isn't that what fans loved about the show?) When the cast members took their final bow, fans were left to wonder what would become of the family that warmed their hearts every Friday night. And with Michelle basically being the star of the show, her future was on everyone's mind. Now, more than 10 years later, fans are getting their answer.

Fuller House knew they couldn't just brush of Michelle's absence. Like I said, she was basically the star of the show. So they addressed the missing family member early in the pilot. While the entire Tanner family gathering in the kitchen, Stephanie (Jodie Sweetin) says she's bummed that Michelle won't be at Danny's going away party.

"Well, Michelle sends her love but she's busy in New York running her fashion empire," Danny (Bob Saget) explains. And, as anyone who worships at the alatar of Mary-Kate and Ashley knows, this is a call out to the actresses' post-Full House careers. After launched a Wal-Mart exclusive line in their teens, the Olsen twins enrolled in New York University in 2004, according to the Los Angeles Time reported. At the same time, Elle reported that they launched their high-end fashion label The Row, as well as more affordable brands Elizabeth & James, Olsenboye, and a T-shirt line called "StyleMint."

But even without the actresses' impressive style resume, we could totally see Michelle running a fashion empire. I mean, just look at these iconic looks.

And let's not forget the diva attitude that comes with being a fashion icon.

Oh Michelle. How we miss you.