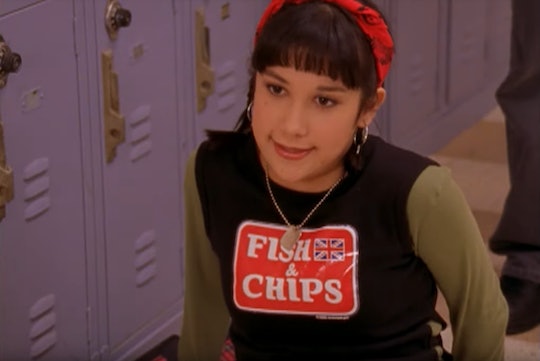 Fans Want To See Miranda On The 'Lizzie Mcguire' Reboot

After months of speculation, Disney confirmed it’s bringing Lizzie McGuire back with a reboot, and fans couldn’t be more thrilled. The series will air on the company’s new streaming service, Disney+, and will follow Lizzie as a 30-something millenial living in New York City. The show’s lead, Hillary Duff has been in the public eye for years, but fans are dying to know what happened to her series’ BFF. So where is Miranda from Lizzie McGuire now?

Actress Laliane played Lizzie’s best friend Miranda Isabella Sanchez on the show from 2000 to 2004, and since then she’s been dabbling in music and songwriting. In 2003, she released a music album called Inside Story, reported Cosmopolitan, and in 2010 she joined the band Vanity Theft as their bassist. The same year, the actress made a small cameo in the film Easy A opposite Emma Stone.

In a 2017 interview with the Huffington Post, Lalaine talked about what her life has been like since leaving Lizzie McGuire. “I’m just more on the relaxed side of things,” she said. “I hold a job down to pay the bills, and I’ve been doing all these random little projects. [My life used to consist of] craziness and nonstop everything, and, when I was a kid, not really knowing what a kid’s life was. It was just go, go, go.” She noted that she has a different perspective on life now, and is trying to take things slow.

Laline told the outlet that she went through a period of “dark years” — which included a drug arrest in 2011 — and lost touch with her Lizzie Mcguire castmates. Luckily, she was able to reconnect when the cast got together for a reunion in 2017. “It’s probably best that we lost touch during those times I went through, and I’m in a completely different place now, which is why it was so awesome that I felt good when I saw [Hilary],” she explained. “Hopefully we’ll keep in touch now. She and I exchanged numbers. She texted me a couple times, and it’s such a trip to randomly see her name pop up on my phone now. It’s like, yeah, we may not have spoken for 14 years, but somehow it’s one of those things where it’s probably gonna just pick up where it left off.”

When the Lizzie Mcguire reboot was announced at the D23 Expo on Aug. 23, Entertainment Weekly reported that Duff confirmed her return to the series, but didn’t reveal any other casting information. “The good news is, just like me and everybody who loved Lizzie and has grown up with her, Lizzie’s also grown up,” Duff said about the new series. “She’s older, she’s wiser, she has a much bigger shoe budget, which is super exciting. She has her dream job. She has kind of the perfect life right now.”

While talking about Lizzie’s new life on the show, Duff didn’t mention series regulars like Miranda or Gordo. “She’s working as an apprentice to a fancy New York City decorator,” she said. “She has her dream guy, who owns a cool SoHo restaurant. She has her dream apartment in Brooklyn. And she’s getting ready to celebrate her 30th birthday — She is still dealing with that 13-year-old no-holds-barred animated Lizzie that’s constantly babbling in her adult Lizzie head.”

At the time of the Huffington Post interview, Lalaine said she was “curious” about a Lizzie McGuire reboot, so fans will just have to wait and see if she returns as Miranda in the upcoming revival.