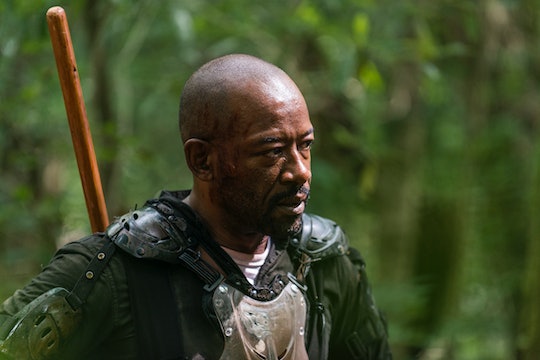 Morgan's Future Is Uncertain On 'The Walking Dead'

Morgan had struggled to acclimate to the post-apocalyptic world of The Walking Dead for years, exiting the series and then reappearing numerous times throughout its run. In "Monsters," he left once again after being overwhelmed with the choices he faced. But where is Morgan going on The Walking Dead? His future on the show seems uncertain at the moment, but must be leading somewhere.

In "Monsters," Morgan was accompanying Jesus and Tara as they transported their Savior hostages to the Hilltop. Morgan and Tara were on Team Kill Them All, which was a fair enough reaction considering all the horrors the Saviors had inflicted on nearly everyone who crossed their path. Jesus, however, was interested in a less violent solution. He and Morgan eventually came to blows, though it seemed like Morgan was a little out of it during their fight, almost as though he wasn't quite in his right mind. Morgan decided that while his bloodthirsty urges weren't right, they weren't wrong either — but it also wasn't a good idea for him to be in the middle of the battle.

Morgan walked off into the woods after that and he didn't appear to be with Jesus and Tara when they met up with Maggie later. But there was no way to know where Morgan went.

Every character on The Walking Dead has undergone changes over the years, but few transformations have been as drastic as Morgan's. He was the first person Rick met upon waking up in a new world populated with zombies, and back then Morgan was a helpful but cautious father with a son to take care of. Losing his son caused Morgan to break with reality. He holed up in a town that he rigged with numerous traps, trying to be proactive about the encroaching danger even though it was far from healthy. The next time Morgan reappeared, it was as a calm pacifist with a new lease on life. Now the increasing pressure of the fight against Negan has begun to crack that facade.

Morgan showed signs of unraveling in Season 7 when he uncovered Richard's (King Ezekiel's former right hand man) plan to goad the Saviors into an attack in an attempt to push Ezekiel out of his neutral position. Morgan ended up killing Richard and since then has shown little remorse about taking life even though he previously refused to. But in "Monsters" it became clear just how much of a toll that was taking on him.

Morgan and Carol are two characters with comparable journeys, and the choices she made in the past could provide clues about Morgan's future. Carol also lost her child and found herself becoming increasingly violent in response until her guilt caught up with her. She chose to leave Alexandria and try to live quietly by herself without hurting anyone. Morgan appeared to be undertaking a similar decision when he walked out in "Monsters," though it was less carefully planned out. He was removing himself from the field because it was no longer healthy for him to be there, just like Carol.

And just like Carol, Morgan probably won't be able to stay away for long. The Walking Dead seems to be building towards something with Morgan, even if it's hard to tell what that end goal is just yet. Many fans have speculated that he may not be long for this world, and that his death could inspire Rick to become a pacifist like Morgan (briefly) was. Regardless of what happens, it doesn't seem like Morgan will be gone for another few years. He may have walked off in "Monsters" to an uncertain future, but he'll be back. He always is.