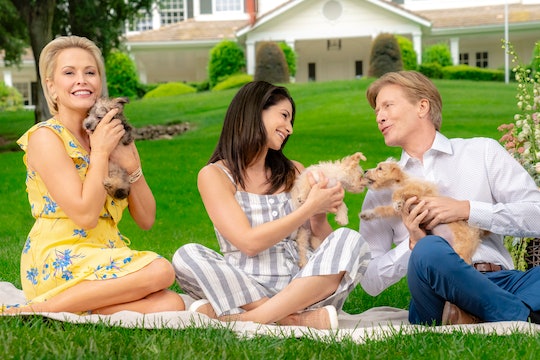 Buckle up — it's officially prime wedding season. This means you're about the get an onslaught of wedding themed TV show and movies to get you in the mood for love. In case you've had your head in the sand, one of the best TV networks that contributes to the "season of romance," is The Hallmark Channel. Their latest comes with such a dreamy backdrop, it'll have you wishing you could get married there. So where is My Boyfriend's Back: Wedding March 5 set?

While the romantic setting where the fictional wedding takes place is the Willow Lake Inn, the real place is Rowena's Inn on the River. In the promo trailer, you can see beautiful fog-covered mountains behind a large body of water. Your first thought might be that it's somewhere like Tennessee. This would make sense, too, if you count events The Hallmark Channel put on for fans in Graceland in Memphis, TN back in May. The Wedding March movies (yep — there are more than one) were executive produced by star, Jack Wagner and filmed over three weeks in Canada near Vancouver, British Columbia. But the stars of the film are throwing some curveballs at those trying to figure the setting out.

I scoured Wagner's Instagram for more context and a lot of the "hearties," as he refers to his fans, think some of the photos are set in Hawaii. Although costar, Josie Bissett, also posted posted some clues on her Instagram page and the tagged "on location" spot says Thousand Oaks, California. It's completely possible that scenes from Wedding March 5 were filmed in a few places that come together seamlessly in the edit room, but alas — the mystery has been solved: B.C., Canada it is and it's breathtaking.

As for the wedding season vibes, My Boyfriend's Back: Wedding March 5 is one that hits them big time. The film follows the up-and-coming wedding planner, Annalise (Cindy Busby), whose main goal is to throw the wedding bash of the century to wow her small business's financial backers. All is well, until it isn't. Of all the people in the world, Annalise runs into the groom's best man (Tyler Hines) — who happens to be the ex that left her five years earlier. I don't want to foreshadow, but I'm pretty sure this is a telling sign Annalise's journey is about to get complicated — especially when you tag the Inn owners, Mick (Jack Wagner) and Olivia (Josie Bissett) who rekindled their relationship years later. The entire Wedding March franchise is about re-connecting, evolution, and the beauty of finding love right where you left it. I can totally get on board with that — no matter where it's set.

In Hallmark's long-standing history of movie-making (since '08 with Countdown to Christmas bringing in bigger number is '09), the wedding season is probably one of the more popular — especially when they tie in familiar faces that have worked together before. Fans like me definitely notice and appreciate that. In case you've forgotten (or didn't already know), Wagner and Bissett starred in Melrose Place together back in the '90s and married in earlier iterations of the Wedding March franchise. They are, dare I say, a match made in Hallmark heaven.

Are you booking travel plans to Canada yet? You should. Honestly I don't care where the actual location is as long as there's a rekindled romance, hilarious wedding mishaps, and probably some kind of happy ending neatly tied in a bow. Wedding season movies are the pinnacle of feel good TV so the location is moot. I think all the "hearties" out there would agree — but the scenery is still totally gorg.