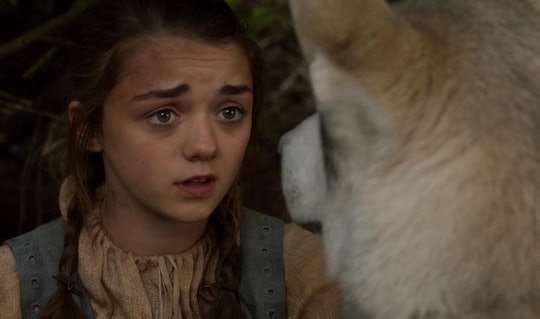 Nymeria Needs To Return To 'Game Of Thrones'

After a long and epic run, Game of Thrones is finally starting to wind down. There are only thirteen episodes left in the entire series, during which all of the questions and cliffhangers fans have acquired over the years will hopefully be answered, like: will Gendry ever come back, or will Lady Stoneheart ever make an appearance? One question that's been nagging at viewers since Season 1 — and may perhaps be the most tantalizing because it could very well never be answered — is where is Arya's direwolf Nymeria on Game of Thrones and what has she been doing all these years? Season 7 could be when she finally turns up.

Viewers have already had a few of those loose strings tied up. Benjen Stark, who vanished north of the Wall back in Season 1, made his return in Season 6, as did Osha, Rickon, and Shaggydog. Hopefully things will turn out a bit better for Nymeria than for any of those characters though. Fans last saw her in "The Kingsroad," back in Season 1, Episode 2. After attacking Joffrey, she was driven away by Arya, who knew she would be killed if she stuck around. Since then, Nymeria (assuming she's still alive, and it would be pretty lame if she weren't) has been running wild around the Riverlands.

Nymeria hasn't been seen or mentioned in the series since then, but fans have always kept an eye out for clues as to what she's up to, and how she might return. Nothing has been confirmed, but a few hints have started to pop up, like a rumor that Maisie Williams was filming scenes with wolves in Canada earlier this year. The biggest reveal comes from Daniel D'Addario, who visited the Game of Thrones set in Belfast, during which he casually revealed that "wolves described in the script as 'skinny and mangy' showed up to the shoot looking fluffy and lustrous." The remark may have been off-hand in D'Addario's article, but fans are going crazy over it.

What wolves could these be? Only two of the original six direwolves — Nymeria and Ghost — are still alive, or at least not confirmed to be dead. This leaves many to believe (or at least hope) that Nymeria will be reappearing as the head of a wolf pack. It's not completely unprecedented, either: in the books, Arya has a spiritual connection to Nymeria just as Bran does to Summer, and she frequently dreams about Nymeria gathering a pack and exacting vengeance on those who have hurt the Starks. While this so far hasn't made it into the show, it could likely happen in Season 7.

Then, there's a line from the incredible second trailer, spoken by Sansa Stark about a lone wolf: "When the snows fall, when the white winds blow, the lone wolf dies, but the pack survives." There's a thousand different ways to interpret this line, a challenge fans have readily accepted. Some have wondered whether it could point to a more significant role for the surviving wolves in the upcoming season, even if it probably refers to a human character.

Again, absolutely nothing has been confirmed as to what Nymeria's doing, where she is, or whether she'll reappear on the show ever again. But the signs are starting to point to a return of Arya's fluffy companion, and you can bet it's going to be epic.

Game of Thrones Season 7 will premiere on July 16 on HBO.